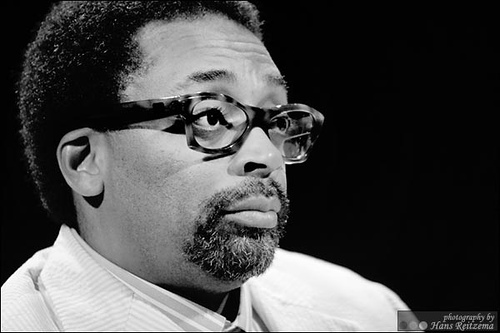 So apparently, Spike Lee moved into my building, and I’ve run into him a couple of times. Its interesting to meet an icon, when that icon is as humble and unassuming as can be. Perhaps his placid demeanor is the result of Spike’s implicit knowledge that he is that dude. Or perhaps, he’s just naturally chill, and I’ve taken for granted the fact that all celebrities aren’t full of themselves. In any instance, Spike’s in the building.

The first time I ran into him, I was with two of my colleagues. Never the one to be shy, I gave him the ‘nod.’ For those of you unfamiliar with the ‘nod,’ its an unspoken form of acknowledgment between Black men that silently says, ‘what’s up,’ through locked eyes, and a barely perceptible ascent and descent of the chin (the actual nod). I also gave him a hearty ‘pound’ (vernacular for handshake, that can involve a simple shaking the hand, or in combination with the pulling of the receipient of the handshake in to oneself, and a gentle thump with a closed fist on the back).

My colleagues, who happened to be two Jewish cats, continued to walk silently by, without saying a word, to which I protested, ‘you guys are in the presence of greatness! This is Spike Lee. Pay the man some respect!’ This of course, brought a smile to Spike’s face, who, I am sure, is used to a certain amount of anonymity (he probably craves those moments when he can move about unnoticed, which is probably why he chose to set up shop in DUMBO), but appreciated my histrionics, nonetheless.

I ran into Spike again today on the elevator. He was, once again, chilling, and I casually asked him if he was all moved in (I usually strike up conversations with people as if we were good friends). He said he was all moved in, and I proceeded to remind him that he could, indeed, call me if he needed a particularly aesthetic for extra work on any of his upcoming projects, as I knew how hard it was to find really attractive extras in these hard economic times.

When we got off the elevator, Spike (and his entourage still giggling) went about his B-I (that’s an urban acronym for ‘business’) while I waited for my colleagues, who had elected to take a different elevator. As I stood there, I thought to myself, ‘I wonder if that guy knows that he’s an icon?’

One of my good friends, Pete Chatmon, is referred to in his Wikipedia entry (yes, he’s famous enough to warrant his own entry), as ‘the next Spike Lee.’ I mean, if other people refer to up-and-comings as ‘the next fill-in-the-blank-with-celebrity-name-here,’ than those celebrities must have achieved some form of iconic status. Haven’t they?

Anyway, in my moment of contemplation, I decided that the next time I ran into Spike, that I would tell him that I consider him an icon, and that as such, he had my profound respect and admiration for all the things he has done to advance the art of filmmaking, not only for people of color, but for all filmmakers. And then I will ask him, once again, to put me in one of his movies as an extra 🙂