A little over 9 months ago I started using Twitter.  Although it had been around for a minute, I was into other things, and didn’t really see the relevance of posting every minute detail of my life with yet another online social networking tool.  Call me short-sighted. 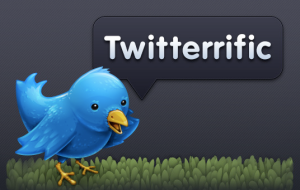 When I joined  Twitter, however, I noted that there were already a few people that I knew, who were active ‘tweeters,’ which gave me more of an incentive to stay tuned-in.  Interestingly, James Andrews, the one person who I feel understands branding more than any person I’ve met to date, was an active tweeter/twitter-er(?) (pardon my ignorance of the actual term to describe people who tweet).

I’ve got to admit, being free of my laptop, but still being able to Twitter from anywhere is quite cool.  The iPhone app puts all my posts, as well as the posts of all the folks I’m following (29 to date) in a simple to use interface, accessible with a click.  Twitter’s features, like twitpic, allow me to customize my posts, and I’ve been going hog wild ever since copping the app.

Today, for example, I Twittered (?) my morning commute, compete with pictures of my stops along the way.  It was really a personal case study of the utility the Twitterific app in action, and I was pretty stoked with the results.  The only thing I didn’t like is the fact that I don’t get automatic confirmations that my posts have posted (I don’t like having to check my feed in order to see the post).  A simple ‘message sent’ would be great.