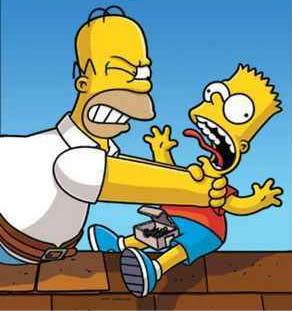 What No Parent Should Do To Their Child (Unless Adequately Provoked)

I just came from a 7:45 a.m. appointment with my daughter’s second grade teacher, Mrs. Caldwell, and I can truly say that I know how Homer Simpson feels when he’s trying to choke out his son, Bart.

Last week, we received a note in our daughter’s backpack, requesting a conference with her teacher, and we feared the worst.

For those of you unfamiliar with the ways of the Asha Ming, our eldest daughter is no joke. From the moment she arrived in the world, she let it be known that it was her way or the highway.

We’ve been trying (with limited success) to acclimate her to the ways of civilized society. For example, we’ve tried to teach her that when she’s bored, yelling ‘I’m bored!’ in the middle of class, is not acceptable behavior.

Similarly, if she see’s someone with any type of physical impairment, we’ve tried to teach her that saying ‘What’s wrong with his hand?’ or ‘Why is she walking funny?’ aloud, is also inappropriate.

So it was with great trepidation that we entered Mrs. Caldwell’s class to learn the motivation for the invitation.

Mrs. Caldwell informed us, that (true to form) Asha had shown her ass (figuratively, thank God) in class, and Mrs. Caldwell wanted to know what strategies we employed in the home to address Asha’s extra behavior.

I didn’t feel comfortable telling her that I’ve beaten her like a slave (not really, but I want to), so Chanel and I offered the PC solutions of applying consequences to Asha’s actions, to clearly express our dissatisfaction (when Asha behaved out of line with our expectations).

We told Mrs. C that Asha had to get used to the new environment (of 2nd grade) and that she’ have it together within a few weeks. (My fingers were crossed behind my back when I offered this assurance, and I think Chanel’s were too).

We talked about last year (and in kindergarten, and in pre-school) when we had a similar conference with Asha’s teacher. We came up with strategies that did, in fact, work out well, and Asha excelled, both socially and academically.

We shared some of these strategies with Mrs. C., who took it all in stride.

Ultimately, her teacher wanted us to know that she was looking for effective strategies so that Asha would not have to spend the entire academic year in the principal’s office. I’d be glad if she only spent half of it there. But I dare to dream.

At least everyone says she’s brilliant.  I know that one day Asha Ming will get it together…

One response to “Stephen Chukumba says: “I know how Homer Simpson feels””