Kevin Powell knows how to throw a party.

I just arrived at Kevin Powell’s 9th Annual Holiday Party and Clothing Drive at Tribeca Cinemas and I’m happy to be out of the cold.

My man Richard Burroughs hipped me to tonight’s function. Rich is one of those ‘in-the-know’ folks, that I believe Malcolm Gladwell refers to as a ‘maven‘ (or is it a ‘connector?’) According to Rich, this was an event not-to-be-missed.

I’m fashionably early and my VIP credentials won’t be issued for another hour (thanks Tanya). So I follow two cats who seemed to know their way around to what I thought was the screening of the Bill Withers documentary, but what ended up being the inner-most sanctum of Tribeca Cinemas, where the beautiful people have started to assemble.

Apparently it’s sound check, and a chick with pipes is checking her levels on stage. Note to self: find out who she is later. I walk around, taking it all in. There is a well appointed bar, four blank canvases on easels set up for an Art Battle, and lots of musicians milling about.

Three hours later I’m jamming to Maya Azucena and a host of talented artists and musicians, grooving to a wicked set from the world famous DJ Beverly Bond and having a frigging blast. 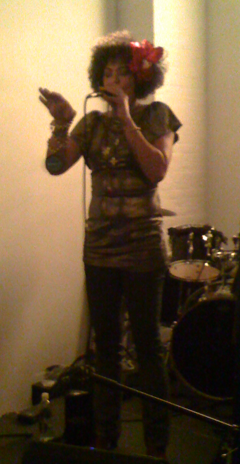 The Art Battle being waged in the rear section of the lounge, produces four distinct and divergent pieces.

Alternating between the acoustic lounge, XBOX gaming room, the main dance floor and the VIP room, I almost forget that I’m at a clothing drive. 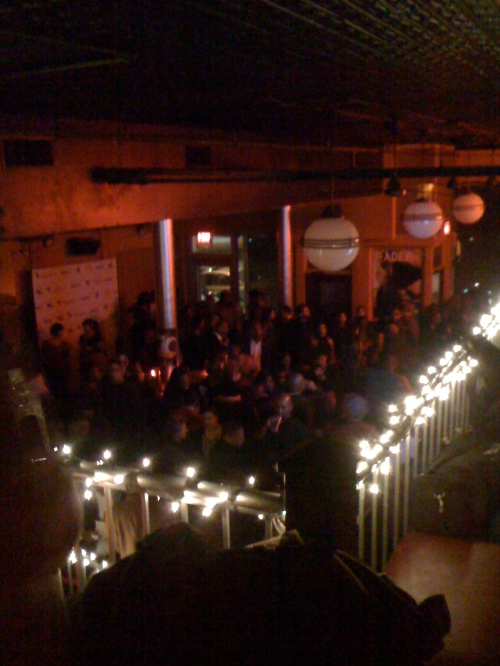 Upstairs in the VIP Lounge with DJ Beverly Bond.

The grandeur of tonight’s event is attributable to Kevin Powell, who brought together corporate sponsors, like XBOX 360, Fader magazine, Smart Water, Anheuser Busch and the New York Post, and some of the most influential personalities in New York for the Street Horizon Streetwork Project, one of the numerous charities to which he lends his support.

In addition to being a philanthropist, an acclaimed writer, activist, pop culture aficionado, and one of the nation’s leading voices of his generation, the night’s host is also my frat brother.

I track KP down and give him a pound for what is unquestionably the best charity event I’ve ever attended, before heading home, thankful that I did my part – and partied.