The Princess and the Frog is not (entirely) racist. 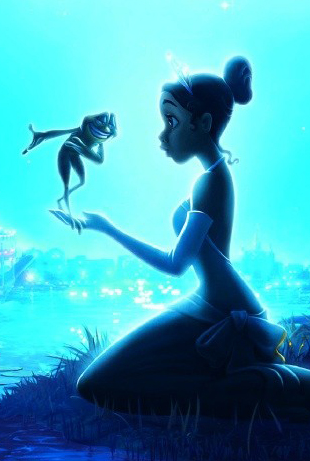 Kiss this little slimy (it's really mucous) bugger at your own risk.

When I learned that the Princess and the Frog was being done by Disney, I had misgivings.

I mean, c’mon. Walt Disney was an out-and-out racist (for all of you who are appalled at this statement, Disney biographers chronicle how he wouldn’t hire African Americans to work at his theme parks because ‘they would spoil the illusion’).

And I was legitimately concerned that the first movie by Disney featuring an African American Princess would be a less-than-flattering portrayal.

My misgivings were not without ammunition. What did we know?

1. The princess gets turned into a frog. Which previous Disney princess movie had the princess meet so ignominious a fate?

2. The princess falls for a non-African American prince. Why can’t we see Black-on-Black love on the big animated screen?

3. The main characters in the promo were characteristically shuckin n’ jivin’. What’s up with the unintelligible firefly and the feeble alligator?

Anyway, I was not going to let my misgivings deprive my daughters of seeing a Black animated heroine and the attendant vicarious experience glory that accompanied it.

So with gentle prodding from wifey, (critical eye) and three kids in tow, I went to critique Disney’s offering enjoy a movie with the children.

And you know what? I loved it!

I came home gushing to the wife about this movie, as if I were a member of the adolescent audience for whom the movie was intended (and from whom this response was anticipated).

No. The princess does not get with a Black prince (he’s brown, and in this instance, that’s good enough). But aside from that, the movie was executed extremely well.

The Princess is not the trifling, neck swinging, tongue-clucking, cliche-slinging characiture of Black women we typically see in animated tales.

She was not hateful towards men and never sought to emasculate the prince.

She was strong, but compassionate. She comes from a good family, with hardworking parents, who instilled in her, character and work ethic.

Aside from the bad guy, Dr. Faciler, the balance of the characters in the movie were wholesome and endearing. The mush-mouthed firefly from the previews was a character of incredible depth (especially for a children’s movie) and not at all off-putting.

In the final analysis, while I still think they should have had the princess marry a BLACK man proper, that is the movie’s singular (and forgivable) fault.

If you haven’t seen it, I highly recommend it.

7 responses to “The Princess and the Frog is not (entirely) racist.”