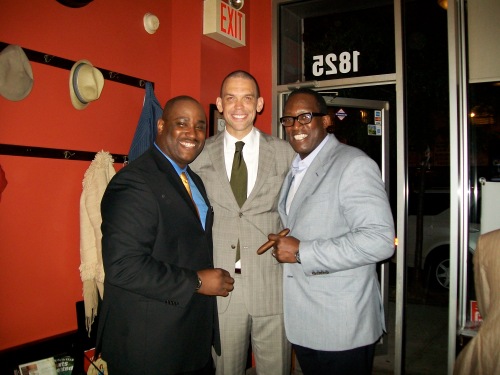 Vincent Morgan cheeses for the camera with the event hosts.

A few months ago, I wrote a post about my first meeting with Vincent Morgan.

At the time, he was a prospective client.

Last Wednesday, I was stumping with my client, as he made his way about Harlem, promoting his candidacy for the United States House of Representatives for the 15th District of New York.

I met him at his place, and we headed to Amsterdam and 138th, where he was scheduled to speak to the West Harlem Independent Democrats.

We arrived early and grabbed a bite to eat at a Spanish restaurant a block up from the WHID office.

After enjoying arroz con pollo with coffee, distributing a few M4C leaflets, and settling the bill (Vince paid), he, Philip (a member of his communications team) and I headed to the engagement.

When we arrived, Vince was introduced and took the floor.

He opened with a reflection on Cinco de Mayo, and it’s relevance to the race against Rangel.

He followed up with a brief background of how he came to public service.

And then fielded several questions about charter schools, small businesses, the viability of his candidacy, and closed.

From there, we headed over to the Madison Cigar Lounge, where an M4C fundraiser/meet-and-greet was being hosted by FYI Communications.

I watched, taking notes and snapping pictures, as Vince worked the room and offered his perspective for a revitalized Harlem.

By the time I headed out, I was left with one distinct impression: Vincent Morgan can win this election.

I’m not a member of the 15th district.

I can’t even vote in the upcoming elections.

But if I could, I’d be voting for this guy, and here are a few reasons why:

1. Harlem needs a fresh perspective. Rangel is 80 years old. What does he have in common with the struggling lower and middle class of the District?

2.  Rangel has been in office waaaayyyy too long. Period. 40 years in the House of Representatives? C’mon, can someone else speak for Harlem?

4.  The guy knows his stuff. Vince is all about facts and being able to substantiate whatever perspective you maintain. Columbia MBA. Need I say more?

5.  He’s passionate. If you’ve seen him speak, watched any of his videos or have met him in person, you’d agree that he means what he says.

I’ll admit that I’m a member of the cult of Vince. We’re both Taurus (his birthday is the day after mine), and I am on his payroll. So I’d better be all about Vince.

But my obvious bias aside, give this guy a gander.

You may very well be looking at the next Congressman for the 15th District of New York.

If you’d like to hear him speak in person, check out the events calendar on his website to find out where he’s going to be next.

If you’re interested in donating to the campaign, volunteering or learning more, check out the Morgan4Congress website.