Not In My Backyard! (or Playground)

No weed in the playground. In the bong, well that's a different story.

Yesterday I got a call from wifey, while she was at the playground in the park with the kids.

Nishuane Park, which is just down the block, is a wonderful little neighborhood amenity.

A sign at the entrance announces that the playground is for children under 11, and that all children must be accompanied by an adult.

So you can imagine my surprise when my wife told me that she was looking a several dime bags WITH WEED IN THEM underneath the swings in the playground. 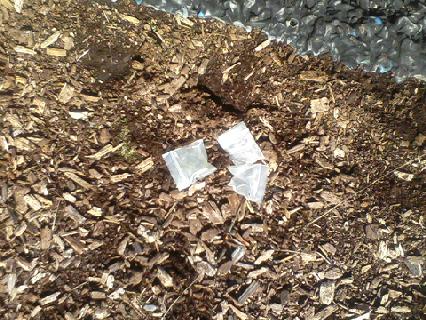 The ‘head’ in me wondered ‘is it the stickiest of the icky,’ but the parent in me was like ‘goddamn punks!’

I don’t delude myself to think that I live in some sort of insular Eden-like enclave.

I’m regularly picking up trash and debris that guest to the playground have simply tossed to the ground (despite the fact that there are two trash bins in the playground).

I’ve even had to discard a condom or two. Who bones in a kiddie playground anyway?

When we discussed the options, there were only three viable ones:

1. Call the cops. Clearly the presence of weed out in the playground meant that the perpetrator(s) felt comfortable enough to possess (and likely) smoke weed publicly without fear of discovery, and without regard to the fact that children may come across their paraphernalia. Calling the cops would at least put the Montclair PD on notice that there was a potential problem with drug use/trafficking in the area.

2.  Do nothing. There were at least five or six other mothers in the park with the wife. One of them had recently played with her child on the very swing underneath which the weed was discovered. It was unlikely that she did not notice the bags and shake sprinkled on the rubber mat. But, since no one else seemed bothered by its presence, why should we? BECAUSE THIS IS NOT FORT APACHE THE BRONX YOU APATHETIC TWITS!

3.  Pick it up and toss it. Treat the weed like any other piece of trash that litters the playground, and discard it. While this was admittedly my first instinct, I was concerned that by not calling attention to the problem, it would embolden the hooligans. And who knows what we’d find next – crack vials? hypodermic needles? I exaggerate, but who knows? Marijuana is a gateway drug!

So we ended up calling the cops, who came out and were thoroughly underwhelmed by the fact that a crime was committed on the playground.

His attitude was so very ‘it’s no big deal lady.’

It was clear from the manner in which he responded, that it was a non-emergent call. He didn’t seem surprised, and I was left (from my wife’s recollection of the event) with the distinct impression that this incident would be stashed away in the file cabinet of some dark, dimly lit store room of the Montclair Police Department, never to see the light of day (or an investigation).

If the same incident had occurred at Anderson, Brookdale or Edgemont Parks, I’m sure the would response have been markedly different.

Forensic teams would have been called to the scene to try to lift fingerprints from the bags.

K-9 units and drug sniffing dogs would be dispatched to determine whether the drugs could be traced.

Caution tape would be erected and the area cordoned off to prevent the contamination of evidence.

Witnesses would be questioned about who saw what and when.

At this point, you can file this under ‘rant’ because I’m generally expressing my annoyance with the fact that I pay a college tuition in taxes, and (at times) don’t really feel like I’m getting my money’s worth in Montclair.

This incident is just another example of the disparities that exist in this town, that many fail to acknowledge, but exists nonetheless.

I’m also writing to let my neighbors know about the BS taking place right under our noses, and asking everyone to be more vigilant.

I didn’t grow up with garbage and condom wrappers and weed bags in my parks and playgrounds, and I’m sure as hell not going to let my kids grow up with that b*llsh*t either!

Do we step up the Neighborhood Watch? Petition for additional roving patrols? Erect video cameras?

I’m definitely going to tell the ‘Mayor of Montclair’ (Alma Schneider) about this! I’m sure she’ll have some answers!

Hopefully Baristanet.com will pick this up, and my fellow Montclairions will have some advice for me on how to handle this problem.

If you’ve got some straight BS going on in your neighborhood, and you just want to vent, please feel free to comment on this post.

Note: As NJ is on the verge of passing a medicinal marijuana law, I wish to clarify that I am not generally opposed to the medicinal (or recreational) use of marijuana by adults. But if you’re going to smoke, do so in the privacy of your home, NOT IN MY BACKYARD!

9 responses to “Not In My Backyard! (or Playground)”