How Do You Dethrone Charles Rangel? Guerilla Style. Welcome to Team Morgan!

Vince Morgan looking dapper at our lunch meeting at Settepani.

Anyone who knows me, knows that I’ve been working with Vincent Morgan and his campaign to become the next Congressman for the 15th District of New York, a seat currently occupied by Charles Rangel.

In 2010, we ran an unsuccessful bid to unseat Rangel, who was in the midst of an ethics investigation, and perhaps more vulnerable than he had ever been in his 40 years on office.

Although we ran a smart race, we did things the traditional way, and were very careful not to say anything too polarizing or controversial about Mr. Rangel.

We wanted Vince to be the focus of our efforts and not Mr. Rangel, who everyone else seemed to be gunning for.

We are now, once again, in an election cycle, and with an election under our belt, we feel confident that the results will be different, this time around.

Well for one, it’s a presidential election year. People typically turn out to vote in greater numbers when the president is on the bill. In the last primary election, Rangel won with less than 20,000 votes. In a District with over 200,000 registered Democrats, that screams apathy. It says that folks weren’t particularly interested in the race OR that they weren’t interested enough to vote for Rangel OR that they believed that Rangel’s re-election was a foregone conclusion. Whatever the case the last time around, this year, it’s a whole new ballgame.

Second, we know what we’re up against. In the last election, we were green. We had no idea what we were doing or what to expect. Although we were very passionate about getting Vince elected, our strategy for how we’d accomplish that was untested. This time around, we’ve got a game plan. We’ve got a great (and growing) team of experts. Our message is tight and our candidate is out early, raising awareness about his campaign.

Third, we are raising money. Everyone in this politics game knows that you need money to run a campaign. Nearly everyone in the race last time raised and spent more money than we did. This time around, raising money is of paramount importance to our efforts. Even though folks aren’t pouring boatloads of money into our coffers (yet), we’re focused on fundraising. What’s interesting is that it seems that everyone else is finding fundraising challenging too.

Fourth, our street game is bananas. Unlike anyone else in the race or planning on running, Vince has young legs and is ready to walk the entire district. We’re actively recruiting young college students, who have unbridled energy and a real desire to participate in the political process to add to our street team. Keep your eyes on the streets in Harlem, in the coming days, and you’ll see what I mean.

Fifth, we are masters of all things digital. There is no other candidate in this race with the internet, social media and general online savvy of Team Morgan. Vince is fond of telling the story of how he taught Mr. Rangel how to turn on his computer. And while the story is genuinely funny, it underscores the point that Mr. Rangel is out of touch with so much more than just the District he purports to represent.

Unlike other candidates, Vince is particularly savvy with all things digital. Vince regularly blogs, tweets, FourSquares, updates his Facebook and other social media profiles himself. He’s equally comfortable on his iPhone, iPad2 or Mac. In an increasingly technological age, it is of critical importance that our officials that aren’t technologically out of touch. 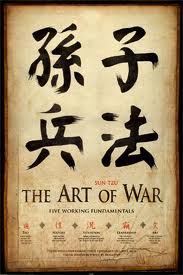 Applying the Art of War to a campaign.

Sixth, we’re going guerrilla. If you’ve ever read The Art of War by Sun Tzu, you know that any successful campaign starts with a plan. But rather than being focused on some rigid, fixed strategy, Sun Tzu emphasized the need for flexibility and fluidity, the ability to quickly adapt to changed(ing) situations.

Finally, folks recognize that enough is enough. One of the central themes (and campaign slogan) for this election cycle is that “It’s Time.” It’s time for Rangel to step down. It’s time for cronyism to end. It’s time to re-establish confidence in our elected officials. It’s time that big business did it’s fair share for the people, and not at the expense of the people.

Every once in a while, you’ll notice that I post up about Vince, share a story or link, or ask you to donate to the M4C campaign. I’m going to keep doing that. But I’m also going to write about what’s going on in the campaign, from behind-the-scenes.

And if you’re at a total loss for how to get involved, you can just give us money.

So stay tuned for my daily updates and welcome to Team Morgan!