Gesturing vs Stylus: Getting the most out of your iPad (aka My Journey From Darkness) 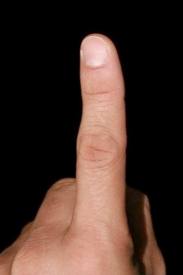 Your finger isn't the only game in town!

I’ve been rocking the iPad for just over a year now and it’s definitely become my ‘go-to’ device.

Having put my iPhone through its paces for several years now, stepping up to the iPad was a welcome respite to the limited form factor of the smaller (and more restrictive) iPhone.

Anyone who uses touch screen smartphones, is familiar with using gestures to manipulate the device and access features.

Pointing, pinching and swiping are all but second-nature to most.

On the iPhone, your fat fingers sometimes prevent you from executing the exact operation you were attempting.

But on the iPad, you’re far less prone to shoot off an email, when you were simply trying to add another address.

By and large, gesturing on the iPad is an effective and efficient means of getting things done.

So it was with benign curiosity that I approached using a stylus.

One of my good friends (and technology sensei) was the first person I saw using a stylus with their iPad.

Mind you, dude was pecking furiously, tap-tap-tapping away, and I was struck by how intimately focused he was on what he was doing.

I was more transfixed by how fluidly he moved from thing to thing.

And his fingers never touched the screen.

It was all about the stylus.

Seeing me mesmerized (I think I may have been drooling) he paused, and turned his attention to me.

When I finally came to, we talked at length, about our respective experiences with gesturing, and he shared with me his perspective on the differences between gesturing and utilizing a stylus.

What made the greatest difference for him, was the precision that using a stylus afforded over finger-based gesturing.

We both agreed that although you’ve got more room on the iPad, and the layout and location of buttons are a significant step up from the iPhone, there are still times when the fat-finger syndrome stymies your attempts to perform one task or another.

The more he talked, the more convinced I became that using my fingers on the iPad was the equivalent of a caveman trying to chisel rock with a bone.

Right then and there, I knew I had to cop one.

And as if he read my mind, my boy reached over into his drawer, and handed me my first stylus…(I have chills thinking about this)…a black Targus.

And from that day on, I was hooked. 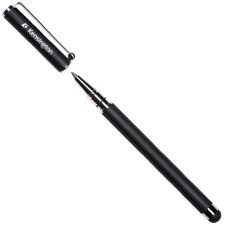 I’ve run through maaaaddd styli (or is it styluses?) since that day, trying out several brands before settling on (what I consider to be) the standard, the Kensington (a stylus and pen combo).

Even though there are certain things you can’t do with a stylus, that can only be accomplished through gesturing, like five-finger swiping to switch between screens, the trade-off is definitely worth it.

I’ve turned several folks on to adding a stylus to their repertoire, and they are grateful for the hook-up.

If you’re up on styli, and have already adopted it’s regular use into your steelo, excuse my enthusiasm.

But I’m a strong advocate for helping folks to increase the utility of their mobile/computing devices and enhancing their overall efficiency.

So what about you? Gesturing or stylus? I’d love to get your feedback.