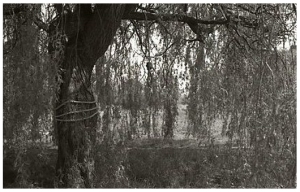 Trees like this feature prominently in Dark Side of Grace. Spooky right?

My girl Melissa Cooper-Caraballo just let me read her manuscript for Dark Side of Grace, a novel she just penned.

Dark Side is a fictional tale which follows the heroine, Asha Davidson, an African American social worker, who runs a center putting ex-cons back to work.

Set in Newark and South Carolina, Asha is called upon by her ancestors, to break the curse that has caused all the female members of her family to appear to go crazy towards their later years.

Her great great grandmother Grace, a slave on a plantation several generations ago, killed the master of the plantation, Massa Henry, to protect her daughter from his lechery.

In doing so, she unleashed a curse which took the lives of Asha’s great grandmother Jessie Mae and her great aunt Emma, as well as her great uncle, Little (Reverend) Jimmy.

The curse was now threatening to befall her grandmother, Nancy (who sees he departed sister, Emma, and the evil Massa Henry torments her daily) as well as her mother, Francis, and sisters, Nzinga and Imani.

Asha, fearing for her family’s safety (and sanity), undertakes the unenviable task of traveling to South Carolina to attempt to free the family of the curse and bring closure.

The book moves quickly, as we follow Asha’s trials and travails throughout the story.

We meet her best friend Lourdes, whose family is practiced in the spiritual arts, and her man Rahman, with whom she has a taboo relationship (since he’s an ex-con from her job, the New Day Program, and someone her family-especially her mother-wouldn’t approve of).

If you’re a fan of thriller novels and stories with supernatural elements to them, then Dark Side is for you.

With disembodied spirits, voodoo and black magic, Dark Side has enough otherworldly stuff to satisfy even the most discerning horror-genre junkie.

But the story is written with such pace that you’re inextricably drawn in and quickly find yourself consumed with it.

And the characters have such realism that you relate to them like they’re everyday people you know.

I devoured the manuscript in two days, and we’re going to be working on her strategy to self-publish and release the book.

She’s currently working on her second novel, which follows Rahman, one of the principle characters, in Dark Side.

I’ve gotten her permission to give my seven readers a taste of the novel, so please do enjoy:

Asha’s head was pounding and her stomach was spinning. She could taste the bitter contents of her stomach rushing to escape her body. She ran up the steps as fast as she could, swung the bathroom door open and dashed to the toilet. The warm rancid vomit practically flew out of her mouth in waves. She could scarcely catch her breath before the next wave pushed her mouth open.

She was gasping for air when she felt her locks being pulled back away from her face and a cold hand passing gently over her forehead. She was thankful that Rahman hadn’t left. She imagined that this small sympathetic gesture meant that their relationship hadn’t been too badly damaged by their first fight. She took a few deep breaths. Asha felt her locks fall back to their normal position around her face.

She turned around to face Rahman and found the bathroom empty. Her heart raced. She pulled back the shower curtain and found it empty as well. She was alone. She ran down stairs and discovered Rahman sitting on the same spot on the couch where she had left him moments before, it looked as if he hadn’t moved at all. He was nursing a cigarette between his lips and was pointing the remote control at the television.

“Damn girl, I thought puking was supposed to make you feel better. You look worse now than you did when you ran upstairs.” Rahman didn’t want to continue fighting.

“You weren’t upstairs in the bathroom with me?” Asha was still panting when she asked the question.

“No, why?” Rahman was confused and disturbed by the wild look on Asha’s face.

“Rahman, please be serious! When I was throwing up, you pulled my hair back for me and stroked my forehead. Today is not the day for practical jokes!” She realized that she was screaming. She looked around the room for evidence of anything out of the ordinary but didn’t find anything.

At first Rahman thought that Asha might be more intoxicated than he realized. He calmly explained to her that she probably held her own hair back and didn’t remember it. He even suggested that she had passed out for a minute or two and dreamed that someone had touched her hair.

Asha’s chest rose and fell at a rapid rate. Rahman could tell that she was really freaked out. He began to get the feeling that she had not told him something. His instincts were good. He had a keen ability to read people and situations. He knew that it was his instincts that kept him alive on the streets and in prison. Now, his gut told him that there was more to the look on Asha’s face.

That was just a taste.

I’ve recommended that Melissa release the first chapter to her book online, so you can get even more Dark Side prior to it’s release.

And I’m definitely going to put you on when she does drop it. Of that you can be sure.

And since we’re talking books, you need to pick up Aliya King’s second novel, Diamond Life, and get your read on!