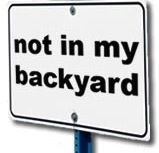 I don’t know how Robert D. Jackson considers himself a mayor.

Sure, he was elected (I didn’t vote for him), but an election alone does not a mayor make.

I would think – and correct me if I’m wrong – that a mayor earns the title when he (or she) is of service to the community which elected him.

So you’ll forgive my taking issue with this so-called mayor, when he fails to attend a public hearing, not once but twice.

For a project he supports.

And remove precious green space from public use.

How this dude sleeps at night is beyond me.

Maybe he wraps himself in a cozy blanket of ignorance, blissfully unaware that his neighbors are gathering with torches and pitchforks at his doorstep.

If only that were true.

You see Jackson was told about the massive turnout Wednesday night for the public comment phase of the Green Acres diversion request.

She also told Jackson and the rest of his council cronies that they should attend last night’s DEP hearing.

Hear for themselves the concerns of the community.

The residents of Montclair who this project will affect.

Did Jackson or his cronies show?

I’ll give you two guesses.

Once again, we were talking to hired guns.

Who, once again, took the brunt of the community’s ire.

Only this time, the room was less full.

The anger had tapered off.

And few in the room were competent to address the environmental impact assessments document in the report prepared by Jackson’s consultants.

No one was surprised by the light turnout.

That’s what happens when you put two meetings on the same topic on back to back evenings.

And if the so-called Mayor doesn’t deem it fit to attend, why should lowly residents.

Moreover, if you think (as many outwardly expressed) that the whole thing is a charade, a rubber stamping process, then why waste your time?

That’s clearly what Jackson and his cronies are thinking.

They may take issue, but it just sound and fury, signifying nothing.

Let them have their meetings and we’ll just push it through.

You’re blatant disregard of us shall be your undoing.

Maybe that’s how things went down when you were mayor in 1987.

Or maybe this is how you run Lorterdan Properties.

Just watch and see what happens.

You’re probably unaware that there are no less than four attorneys on High Street.

And cats well versed in the NJDEP approval process.

Motivated to watch you and your cronies kick rocks.

You will not get that Green Acres diversion.

And you can quote me on that.

You’re going to see us Tuesday at the next Council meeting.

You can’t avoid us forever.