And so it begins. Has Vine become the “in” thing?

A few days ago, I posted about Vine, the social video service launched by Twitter on Thursday.

Vine users can create short, six second videos, which can be published to their Twitter, Facebook and/or Vine profiles.

Well it seems that the world has gone Vine mad in the space of a few short days.

Over the weekend, at least two different sites have popped up, built off of the Vine phenomenon.

The first, Vinepeek, is a real time aggregator of Vine videos. 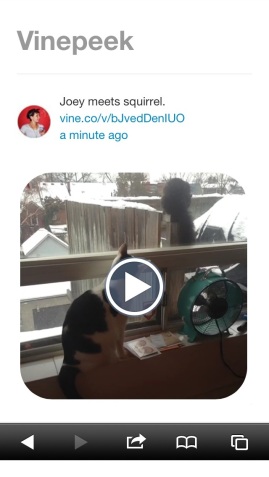 Since all Vine posts are public, viewers can see videos from everyone in the Vine network.

The service is very simple, and offers few options beyond watching videos muted or with volume.

This service is buggy too.

If you visit the site from your iPhone, good luck with getting your browser back.

The videos launch automatically, one after the next, in an endless stream of annoyance.

I had to kill Safari to stop the madness.

Despite the limitations of these initial forays, the interweb is literally abuzz with Vine.

Several blogs posts have been devoted to Vine etiquette, the proper way to create Vine videos, and conversely, why Vine signals the end of the world.

But whatever your perspective, Vine has clearly captured the attention of the (media) masses.

Whether Vine will be a flash in the pan or not remains to be seen.

But I suspect that Vine, like Pinterest before it, will develop a massive user community (aka eyeballs) that brands would be remiss to ignore.

One good thing about Vine is that fact this it is a video medium.

And brands can use it more effectively than long form videos, which requires a user sit through the entire thing.

Smart marketers will figure out how to sell folks in six seconds or less.

With the Superbowl coming up, I wonder whether the powers-that-be at Twitter had the foresight to buy up some of that Superbowl ad time.

Outside of the natural buzz they’re getting from the geekorati who are already up on these techie trends, the Superbowl represents an unprecedented opportunity to get Vine in front of the (tech-ignorant) masses.

But I suspect there are already several hundred thousand Vinies? Viners? out there already.

By the way, what is the appropriate verb for making Vine videos? Vining?

I’ll bet you the Crispin Porters of the world are already hard at work coming up with Vine pitches for their brands.

So what do you think?

Is Vine here to stay?

Are you planning to Vine?