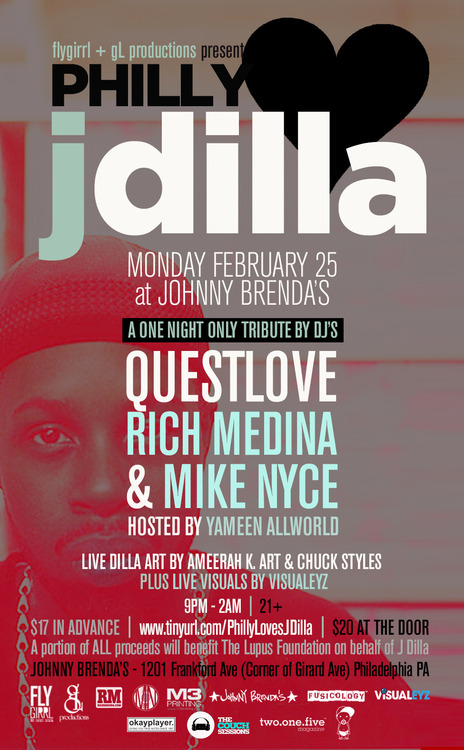 So a few weeks ago, my people wanted to throw a little party in Philly.

They were putting together a charity event to raise money for the Lupus Foundation.

The event was going to be a tribute to J Dilla, the legendary rapper and collaborator who succumbed to Lupus at 32.

What started off as a simple idea, quickly mushroomed into an over-capacity event.

In two short weeks we got Questlove, Mike Nyce and Rich Medina to play – together – at Johnny Brenda’s and pay homage to Dilla.

With those three sharing duties on the turntables, it’s not hard to understand why it was standing room only.

Rich took over from there, digging deep in the crates.

And then it was Questlove’s turn.

300+ people packed into Johnny Brenda’s in Philly on a Monday night.

Accompanied by a steady stream of beats blasting through the speakers, Mark Hines of Visualeyz handled the visuals.

Straight eye candy for anyone gazing up at the two-story projections flanking the stage.

All night long, Visualeyz flipped images up on the screen, drawing partygoers deeper.

In addition to the digital audio and visual play, there were also fine artists on hand getting busy.

Ameerah K and Chuck Styles each created portraits of the night’s posthumous honoree.

Despite the short window to put everything together, the event went off without a hitch.

The night would not have been possible, without the generosity of a few sponsors.

Okay Player, The Couch Sessions, M3 Printing, i-g creative and Two.One.Five Mag were all (partly) to thank for the successful night.

And what would a J Dilla tribute been without Yameen Allworld emceeing?

I just happened to be in Philly and was able to get a fix.

Before I had to boogie and catch a train back to Montcleezy.

But I was able to capture a few snippets for your viewing (and listening) pleasure.

Questlove gets set to take control of the turntables from Rich Medina.

Anyway, if you want to see more snippets, you can check out the Visualeyz YouTube channel.

And if you want to see all the chatter from last night’s event, visit Twitter and search the hashtag #phillylovesdilla or #phillylovesjdilla.