What do you get when you combine flat screen televisions, branded social media feeds, table top iPads and frozen yogurt?

Let’s YO! Yogurt is an all natural frozen yogurt franchise, known for its innovative use of in-shop social media.

They serve a dizzying array of whacked out flavors of frozen yogurt (about 80 of them), in what has to be the hippest ice cream parlor you’ll ever see.

Let’s YO! is apparently a growing phenomenon.

What started off at a few spots in 2011 has grown to over 30 in just a few years, with locations in Manhattan, Brooklyn and New Jersey.

This weekend I took my kids to their Montclair location. 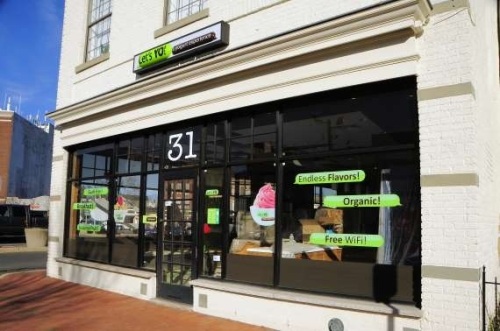 Let’s YO! is a self-serve ice cream shop, which allows you to make your own cone, cup or sundae.

There’s a big board at the start of your DIY journey, which outlines the simple steps for building your unique frozen masterpiece.

Once you’ve selected your flavors, you can add toppings.

With everything from rainbow sprinkles and M&Ms, to granola and rice crispies, it’s an ice cream aficionados dream.

But the pièce de résistance is unquestionably the iPads mounted to the tabletops through the shop.

Connected to the TV screens, the iPads allow customers to share their experience through social media both inside and out of the store.

My kids eyes bugged out of their heads as we sat to enjoy their cavity-inducing creations, and they noticed the iPads on each table.

Secured in landscape orientation behind green protective casing, the iPads were loaded with a buttload of games and entertainment apps.

The fixed orientation was great for games best played in landscape mode.

Not so much for portrait-only games.

The kids could have cared less about the fixed orientation and lost themselves in gameplay.

I was appalled at the grubby home buttons or sticky screens but I didn’t let it get the best of me.

At the end of the day, Let’s YO! is a modernized take on the Carvel, Baskin-Robbins and Ben & Jerry’s scoop shops of old.