WTF is a Blipp? Augmented reality, that’s what.

With my tickets to Iron Man 3 already secured, I paused to see what insight I could get before the movie tonight.

“If you want to try on the Iron Man suit, Blipp the photo below..”

Curious, I download the Blippar app and point it at the page.

Blippar – who comes up with this shit?

Anyway, I launch the app and a zillion little red dots scan the page until they lock onto something, and then this.. 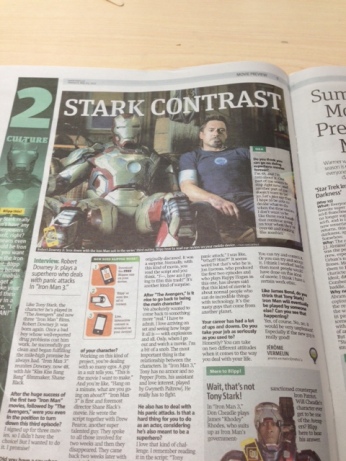 Not novel, but cool.

Clicking on the tabs, I was able to put my face inside the Iron Man suit (snore), and read (another) review (snore).

The exclusive interview with Don Cheadle was a pure tease, because the link didn’t work.

It was so exclusive no one could read it? watch it?

Who the fuck knows.

Blippar is one of the latest entrants into the augmented reality space, giving traditional two-dimensional ads a three dimensional makeover.

And providing brands and advertisers, with the ability to create interactive, feature-rich opportunities to enhance audience engagement.

While still in it’s infancy, there is a lot of promise in augmented reality.

Metro touted today’s issue as it’s first “interactive edition” which means that there are more to come.

I previously wrote about my experience with Spiderman and an augmented cereal box.

Back then, I was talking about Aurasma, one of the early entrants into the space.

Since that time, many more players have joined the race.

Did you notice the rhyme in those last two sentences? Space, race. I’m a poet and don’t even know it!

Blippar has been doing some really cool things with a number of brands, including Bud Light, Justin Bieber, Wrigley’s gum and Dominos.

You can check out their Blipps page to see some of them.

One of the limitations to widepread AR adoption, though, is the fact that you’ve got to download an app to take advantage of it.

Most people aren’t going to do that, especially if there are competing systems.

It’s not like anyone who already had a QR code reader installed on their device saw a Microsoft Tag and was like, “Oooo! I really want to see where that takes me, let me go to the app store and cop that app.”

And it’s highly unlikely that once someone selects an AR app, they’re going to get a second (or third) one to view a different promo.

Hopefully one day, this functionality will be built directly into your device, with handset manufacturers utilizing a uniform AR platform.

With the AR space still so fragmented it will probably be a while before any app achieves a significant foothold and/or becomes the standard.

But seeing another use of augmented reality in the wild tells me that an AR future is not far off.

2 responses to “WTF is a Blipp? Augmented reality, that’s what.”