A LinkedIn endorsement is crap. Recommend me. Please?

Look who has endorsed me!

As of late, I’ve been receiving numerous ‘endorsements’ from folks I’m linked to on LinkedIn.

Now ordinarily, I’d be flattered to be recognized by my professional colleagues for my undeniable talent and skills.

One of the inherent values of LinkedIn has always been the ability to be objectively assessed, not by what you say you’ve done, but by your affiliation to other people.

The assumption being, of course, that your connection to other professionals is a form of vouching.

Do an exceptional job, and you’ll often receive a written recommendation that serves as a testimony to just how nice you are at this thing or that.

Not to brag (I lie) but I’ve chalked up a couple of recommendations in my day.

Once upon a time, a recommendation was all you could do in LinkedIn to acknowledge someone’s exceptional work or service.

Simple answer: an endorsement is crap.

That’s also simple: because you can receive an endorsement from someone who knows nothing about your skills and expertise or what it is you do or that they’re endorsing you for.

Case in point: I have a colleague with whom I worked with years ago in a project management capacity. I was producing a series of music workshops with international performance artists and musicians, and he was among the US artists I brought in.

Despite the fact that he knows nothing of the mobile Stephen, recently he’s been endorsing me for mobile, mobile marketing, apps, iOS, Android, etc.

And it’s not to say that I’m not the Don Dada in all of these areas, but how would he know?

We’ve never worked on a project where he had first hand experience of my mobile prowess.

Sure, he could be following my professional development, or reading my blog and gleaning that I’m a mobile Jedi master, but his knowledge is indirect at best.

And more importantly, its not based in fact.

Mind you, he’s not the only one engaging in this behavior.

I’m sure we’ve all received these email notifications from LinkedIn, advising that we’ve been endorsed for one thing or another by one of our colleagues.

At first, I’m sure you were excited, like me.

But as you looked into these endorsements, and were prompted to endorse folks back, you realized that endorsements weren’t all they appeared to be.

Look at all the pretty thumbnails!

It’s a carefully introduced scam, dressed up as a legitimate form of vouching.

All it takes is a click and viola! You’ve endorsed someone.

No muss, no fuss.

And now your colleague has been endorsed in turn.

Where’s the value in that?

There’s no context to an endorsement.

Nothing to put anyone who comes across your profile on notice of just how awesome you are.

Sure, a whole bunch of thumbnail images of colleagues endorsing you for one skill or another looks impressive.

But does the absence of these boxes mean you’re not skilled in an area of your professed expertise?

And what’s the value of an endorsement really?

Something that’s as simple as checking a box next to someone’s picture can’t be anywhere nearly as valuable as a penned (or typed) recommendation.

In this age of snack food style instant gratification metrics – likes, followers, fans – it’s no wonder that LinkedIn has added (rather meaningless) endorsements.

And while there are probably many profiles on LinkedIn who are legitimately as adept at the skills and expertise that the number of related endorsements seem to suggest, I’m sure that there are many more whose endorsements grow from popularity, reciprocity and boredom.

So if you know someone and think they do great work, take the time to write a recommendation.

The kindness of strangers (aka My Blog is Awesome) 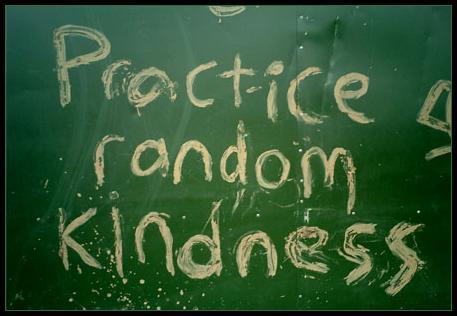 I’ve got to testify.

Today was a weird one.

Somewhere between getting off the train in Hoboken and arriving at the Hoboken PATH entrance, I lost my wallet.

It’s not really a wallet.

I don’t dig the bulk of men’s leather wallets.

You can’t conveniently stow it away without generating an unsightly bulge within your garments.

Got a wallet? You’ve got a bulge.

So long ago I gave up the bulk for money clips and slim sleeve-like wallets.

My current card and money holder was actually a gem purse from Steven Fox Jewelers.

Anyway, it was this purse that was lost in the span of 300 steps.

You can imagine my surprise arriving at the PATH turnstiles, reaching into my pocket to retrieve my Metro card, only to find it gone.

I frantically performed a self stop-n-frisk confirming what I feared – I’d dropped my wallet.

All was not lost though.

I had only gone three hundred steps and my train just arrived at the station.

I could not have been in Hoboken for more than a minute.

I decided to retrace my steps back to the train.

The foot traffic was light, and there weren’t many people in the station when I arrived.

So I assumed if I didn’t see it along the path back to the train, it was either still in my seat or in the custody of a NJ Transit conductor.

But that’s just too clean.

Of course, it wasn’t along the path, on the seat or with either of the train’s conductors.

Head over to customer service.

Report your missing wallet and someone may turn it in.

That’s what “Lost and Found” is for right?

I broke it down to the nice Black lady inside the makeshift Customer Service booth, who took my info, handed me a little slip of paper with a number, and promised to call if my wallet was recovered.

When I asked her if there was a TD Bank in the area – so I could try to convince them to allow me to withdraw my money (with no credentials) to get on the PATH – she dug into a little box from under her desk and proceeded to hand me 11 dusty quarters.

That was the first act of kindness I received today.

Thankful for her charity, I went back to the PATH to buy a single ride to get to work.

But wouldn’t you know that when I went to pay with my 11 dusty quarters, three of them weren’t even quarters.

They were quarter-sized Canadian nonsense coins.

Ashamed I was even in this predicament, I retuned sheepishly to inform the charitable Black woman handing out dusty quarters, that she had given me slugs.

Thankfully she took the slugs, laughing heartily at her error, and dug out three genuine dusty quarter replacements.

Back to the PATH.

Got on the train.

Annoyed the entire ride from Hoboken to 23rd.

Brooding over the fact that as soon as I got to the office, I was going to have to cut off all my shit.

At some point I was going to have to do the dreaded DMV dance to replace my license.

And replace my COSTCO, AAA and loyalty cards.

Got to the job in a funk.

Glared at the desk clerk, daring him to request the inane tap on the key reader to confirm I worked in the building.

Nigga you see me every day! Don’t even go there!

No pleasantries exchanged with riders sharing the elevator I rode up to the sixth floor, or my colleagues when I hit the door of the office.

Flopped down into my seat at my desk.

Whipped out my lappie and set it on its stand.

Flipped it open and noticed three emails in my Gmail.

The first one was from a Gabriela.

I’m a pimp. So, intrigued, I opened it and read:

Hi Stephen,
I found your wallet on the Path this morning. I work in Manhattan and live in Bloomfield. I Google searched the name on your license and found your blog and your email address. Please let me know if there is an address you would like me to send it to or if you would like to meet in Montclair so I can give it to you. I saw a Montclair address on your license. Let me know!
Best Wishes,
Gabriela

The second act of kindness.

I think I teared up.

I subsequently learned that the lovely Gabriela worked 12 blocks away on Broadway.

She was on her way to a meeting and offered to leave it with her secretary.

Two hours later, my beloved was tucked squarely in my buttoned back pocket.

And I was spared the agony of having to cancel and replace all my shit.

Now what have we learned?

Always check your person for your wallet before you get off the train?

Keep a lil’ stash of moolah tucked on your person, just in case your shit goes missing?

Publish a pseudonymous blog, so people know where to find you when you lose your shit!