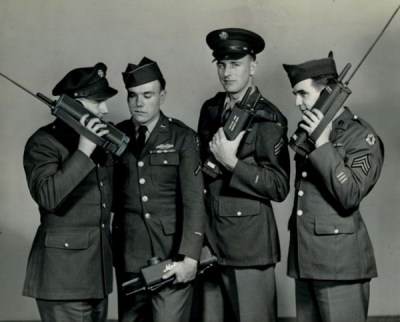 As you all know, I’m writing a book chronicling my journey as a certified digerati.

It’s been a minute since I’ve updated you, so I felt it appropriate to devote today’s post to my non-blog related rambling.

I shared my intro in my last exercise, and I’ve got the first chapter in the works.

I’ve been messing around with various opening chapters for The Life Digital, and have settled on this:

My earliest recollection of being gadget obsessed was 1976, when I was in the first grade.  Sean Leary brought in a brand new walkie talkie for show-and-tell.

I had never seen such a beautiful piece of technology.  It was sleek, black and shiny.  There were buttons, dials and a long silver antenna, which expanded and collapsed into itself.  It was a thing to behold.

It crackled to life when he turned it on.  It’s shiny newness would have been enough for me, but then I heard it’s Siren song and it took me over the edge.  The clean crisp sound of disembodied voices (interference) floated from its speaker.  He turned a dial, adjusted the channel, and lowered the volume to an obedient hum.

Right then and there I had to have it.  The exact details are still a bit sketchy, but before the end of the day, the walkie talkie was mine.  I had liberated my precious from Sean’s sweaty palmed brutish tyranny.  The power of the crackling voice box was mine!

In the fleeting moments that passed, I imagined myself in all kinds of adventures with my prize.

“Mrs. Williams is pulling out of her driveway. Over.”

“Three clicks to the North. Over and out.”

No matter. Me and my disembodied voice, inseparable forever.  It never occurred to the six-year-old me that you need two walkie talkies for the adventures I imagined in my future to occur.  Or that the device’s owner was not as daft as I.

I don’t know how or when, but by the end of the day, Sean Leary discovered his beautiful walkie talkie missing.

And alerted the authorities a/k/a our jailer – Sister Brian.  Oh wait, did I mention I went to a Catholic school?

Anywho, Sister Brian enlisted us all to help Sean find his walkie talkie.  We were all asked to look under our desks.  Back in the day, your desk was a chair, tabletop, and cubby (underneath your seat) in one.  The undercarriage was used to store your texts and notebooks.

One by one, we got out of our seats and checked our respective cubbies for the walkie talkie.

Then, Sister Brian asked us to check our backpacks and jackets in the closets, in the event that one of us had inadvertently placed the walkie talkie with our belongings.

Again, one by one, we filed to the back of the class and furtively searched for the walkie talkie.

Ha! I was going to get away with this!

Fantasies of sending clandestine messages to unknown compadres flashed through my mind.

“Blue Falcon, what’s your twenty? Over.”

“Gold Leader, I’m twenty clicks to the south bearing down on your position. Over.”

“Roger that Blue Falcon. Over and out.”

Again with the “clicks.”

My daydreaming was interrupted by a voice.

“Stephen? Can you help me?”

Together Sister Brian and I walk out of the classroom.

Mind you, I was Sister Brian’s assistant and routinely helped her with the odd task now and again.  It never occurred to six-year-old Stephen that the jig was up and my malfeasance had been discovered.

When we arrived in the hall a few feet away from the classroom door, Sister Brian proceeded to pat me down NYC stop-n-frisk style.

With the aplomb of a beat cop discovering contraband on a suspect, Sister Brian calmly retrieved Sean’s walkie talkie from inside of my pants.

The bulge in my pants must have been painfully obvious.  To everyone but me, of course.

Thankfully, the shame of my crime was mitigated by Sister Brian’s tact.

We returned to the room, with Sister Brian crediting me for the walkie talkie’s discovery, and The Walkie Talkie Incident ended without incident.

Until I got home, of course.  Where Uneze tanned my hide.

It was then, nursing my bruised ass – and ego – that my lifelong digital journey began.

But a start’s a start.

I had the bug and things could only get better.