A few days ago, a friend of mine put me up on some shit for which I will be forever grateful.

I was trolling through my timeline and came across this update: 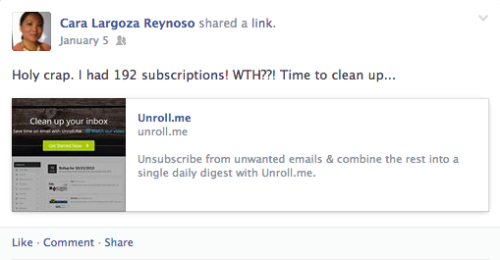 I don’t blame you for being skeptical.

Before I get too deep, let me explain what Unroll.Me is first.

Unroll.Me is an application which allows you to unsubscribe from any of your email subscriptions with one click.

I’m going to give you a second to let what I’ve said sink in.

If you’re like me, over the years you’ve signed up for one thing or another, registered for something or otherwise gave up your email.

More likely than not, you legitimately subscribed to things you’re no longer interested in receiving – or are at least not interested in seeing in your inbox every day.

And now, your email is a virtual parking lot for spam.

Even with the best spam-catchers, there are some things that still get through.

I signed up and entered the email address for the inbox I wanted cleaned up.

Within a few seconds Unroll.Me had compiled my 206 subscriptions. 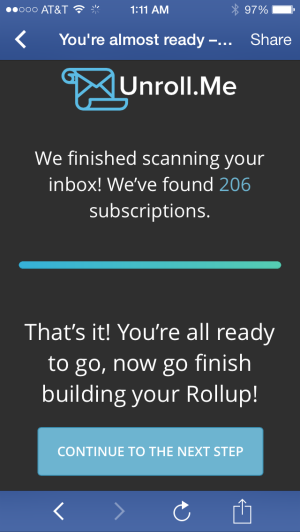 A few seconds later I had unsubscribed from 203 of them, and created a rollup of the few I wanted to keep.

Rollup is a way to manage the emails you want to keep.

The Rollup (what it’s actually called) allows you to combine your favorite subscriptions into a daily digest email called the Rollup.

If you’ve ever tried to unsubscribed from an email subscription through the so-called “unsubscribe” links, you’ve probably had mixed results.

But I’ve been on Unroll.Me for a week and it’s made a tremendous difference.

I’ve had nary an errant email in my inbox.

Not one of the 203 subscriptions removed by Unroll.Me have returned.

And my inbox is as lovely (and manageable) as it ever was.

So if you’ve got an inbox that’s driving you to drink, get with Unroll.Me.

And you can thank me (and Cara) later.