Fight for your right to Internet. Net neutrality threatened. 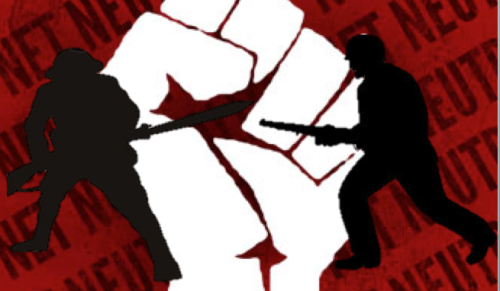 Net neutrality is under attack.

Trolling my tech news sites yesterday, I came across a story that is most people probably missed.

Did you know that the phone and cable companies are now legally able to block internet sites?

I’m not talking China or some other draconian foreign communist regime that you would expect to restrict access to the internet.

This is happening right here in the good ole US of A.

What am I talking about?

Yesterday a D.C. Circuit Court issued a decision striking down much of the FCC’s network neutrality rule.

Net neutrality (also network neutrality or Internet neutrality) is the principle that Internet service providers and governments should treat all data on the Internet equally, not discriminating or charging differentially by user, content, site, platform, application, type of attached equipment, and modes of communication.

Net neutrality=free, open and equal access to the net.

Why is net neutrality important?

Without net neutrality, cable and phone companies can use differential treatment in the application of their policies.

They can elect to give preference to whoever pays them more.

Worse than that, phone and cable companies can legally block certain sites wholesale, preventing internet browsers from accessing content at any time for any reason.

For some of you, this may be news.

But the reality of the situation is that this fight has been brewing for years.

This issue goes all the way back to 2007 when Comcast tried to block user access to peer-to-peer networks.

The FCC stepped in and told them that they couldn’t restrict user access, and Comcast sued – and won.

At that time, it was determined that the FCC while they had overstepped their bounds with respect to how they responded to Comcast’s restriction of user access, the FCC did have the ability to regulate internet access, but they had to go about it a certain way.

The rules they issued, were challenged by Verizon, and the ruling yesterday, struck down major aspects of the net neutrality rules.

Now the FCC must act expeditiously to protect Internet users from the (potential) arbitrariness of cable and phone companies.

Although many analysts suspect that the cable and phone companies won’t necessarily block access to sites, they do believe that there is very real incentive (read “$”) for throttling certain sites in favor of others.

In the final analysis, if the FCC doesn’t immediately move to reclassify certain types of cable and phone services, and thereby bring them squarely under their jurisdiction and rule-making authority, we could all be screwed royally.

Mind you, this post is really an extremely abbreviated summary of the Court’s decision and it’s impact on net neutrality.

For a more comprehensive dive into this issue and the court’s ruling, check out Slate, Free Press or Wired’s reviews of the case and it’s implications.

But, all is not lost.

There are folks out there fighting to ensure that this eventuality never comes to pass.

Organizations like Free Press, Public Knowledge and the New America Foundation, are Internet crusaders devoted to ensuring unfettered access to the internet for all.

And now that you know, perhaps you too could get involved.

Don’t be one of those cats who sits by idly in the sidelines thinking it’s someone else’s resposibility.

Or one day you may wake up to find the internet you once knew and loved – gone.

4 responses to “Fight for your right to Internet. Net neutrality threatened.”