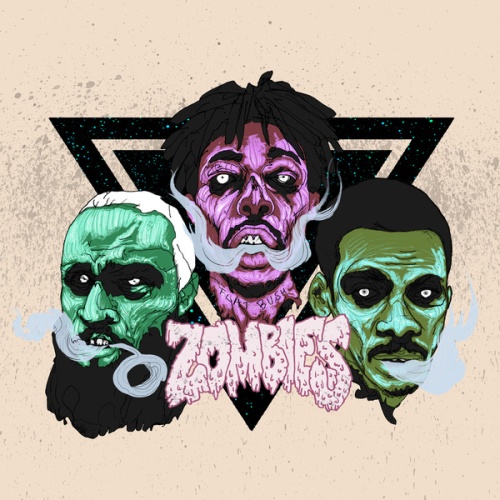 If you’ve never heard of the Flatbush Zombies, I will forgive you.

If you’re a person of a certain age, like me, your musical tastes are fairly pedestrian and rap music probably doesn’t factor highly into your playlists.

You probably listen to more classics and tame music (read John Coltrane on Pandora) and your underground music radar has probably been turned off for a while.

For you, music discovery takes the form of recommendations from the NY Times Music section.

You’re not trolling Grooveshark or YouTube looking for the latest hip hop videos.

If you do listen to rap, and are still a die hard hip hop fan, you’re listening to established artists.

Rarely do you stray off the reservation.

I say all this to say that it’s highly unlikely that your aural travels have brought you to the land of the Flatbush Zombies.

Since 2012, they’ve put out a series of well received mix tapes and even though they’re relatively new, they’ve built a loyal following both on and offline.

Despite the (trite and repetitive) themes of sex, drugs and alcohol, these kids can spit (spit=rap really well for my slang-challenged readers).

They remind me of the Alkoholics, Cyprus Hill, Wu Tang, and Kendrick Lamar all rolled into one.

Having already collaborated with the likes of Action Bronson, ASAP Rocky and others the Flatbush Zombies are not newcomers, by any stretch of the imagination.

But they’re new enough that you might not have heard of them.

I was put on when I heard that my man, Mark Hines (aka Yoda) was working with them, and was immediately intrigued.

They are eclectic looking, and very cerebral.

And their videos are ‘trippy’ to say the least.

Their videos are well produced and engaging.

But once you add Mr. Hines’ video production skills on top, everything becomes…well, better.

He’s working on their visuals for their set at Coachella this week, and I can tell you that it’s nothing short of amazing.

Now Flatbush Zombies aren’t headlining at Coachella or anything like that.

In fact, they’re just one of the myriad of underground acts that Coachella will allow to shine on their stages this year.

But they will probably be one of the few (if not the only) underground act making use of the massive screens on stage.

And with Visualeyz’s tricked out treatment of Flatbush Zombies’ images and video content, their set is going to be off the chain.

So what am I saying?

1. Peep Flatbush Zombies.
2. If you’re going to be at Coachella, catch their set featuring video production from Visualeyz.
3. Thank me later.

3 responses to “Flatbush Zombies+Visualeyz=Coachella turned up.”