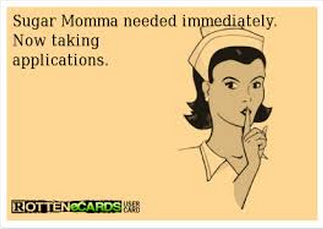 For the record, I believe that a man should stand on his own two feet and fend for himself.

We are the bread earners, hunter/gatherers, protectors.

It is our duty to bring home the bacon and provide for our brood.

I am no exception.

Each day, I pound the pavement and handle my business.

In addition to my 9-to-5, I juggle numerous side-hustles, all to make ends meet.

Being an entrepreneur at heart, I stays on my grizzy, but every once in a while…

I aspire to be taken care of.

And I’m not ashamed to admit it.

I want to be arm candy.

A vacuous man cavorting about at the behest of some paid broad.

Who wants me solely because of what I represent.

No. Not raw unbridled sex.

But I’m not a prostitute.

As such, I often fantasize about being taken care of by some old(erish) biddy, who enjoys my looks, company, and overall joie de vivre.

I know a few women who live this life.

They’re single, fly and have men banging down their doors, vying for their attention.

Routinely, they get offers from CEOs of major corporations, titans of industry, moguls and tycoons, to do this or that, flit about here or there.

You name it, they’ve been offered it.

Baubles for their attention.

Sometimes, they take them up on their offers.

Sometimes, they do not.

Regardless, the offers pour in.

Granted, these are single women.

But that’s besides the point.

I just want in on the action.

Not from men, you morons!

I want in on being the object of attention from wealthy female suitors vying for my attention.

But continue to indulge me.

Why is it that dudes don’t get this type of treatment?

Why isn’t there some chiseled boy toy with secret recordings of Martha Stewart’s racist rants?

How come Oprah hasn’t been spotted with some Black Adonis on her arm?

I’m not even saying that I’m trying to break anyone off.

But, biddies, feel free to Indecent Proposal me – I’ve already been pre-cleared for a seven figure roll in the hay.

That’s right. The wife will pimp me for seven figures. This dick ain’t cheap.

And have some wealthy heiress bequeath me her fortune in her will for my years of loyal companionship.

Is that so wrong?

Apparently, there are a bunch of sites devoted to linking hunks (like myself) to wealthy women.

But I need something more organic.

Like the stories of regular people, discovered walking down the block, or working at MacDonalds, and become super models.

I’m not trying to find a sugar momma.

I want one to happen upon me.

And shower me with gifts – simply to get my attention.

Because it’s not like I’m just going to give in.

There’s got to be some courting.

I can be coquettish.

Man, if I were born a woman AND I was as fly as I am, nigga’s would be in trouble!

Finally got that off my chest.

Now I can get back to grinding.

Every once in a while, I slip.

But if there are any old biddies out there, looking for a 6’3″ fine Black man to accompany them to $1,000-a-plate fundraisers, the Whitney Biennial, Cannes Film Festival, or any other event of this caliber….holla at your boy!

Chanel, you may open your eyes.