I recently took a train ride with David Polinchock (@polinchock), a technologist I had met over decade ago through James Andrews (@keyinfluencer) when I was still in private practice.

David was part of the Entertainment Technology Center, a division of Carnegie Mellon’s research arm that sought to leverage academic brain power with business.

Back then, we launched a sponsored research project to develop the DigiBoxx, a self-serve kiosk for music, where you could refill your iPod or MP3 device with music on the go.

This was 2003 (or ’04) long before the arrival of multi-gig devices capable of storing buttloads of music.

And while we didn’t have license the first to address all those pesky copyright issues, we did develop a working POC and that was a start.

Fast forward to 2015, and David and I are still pushing the envelope.

No longer the bright-eyed optimists, we chatted nonetheless about how far technology had come and what we saw on the horizon.

When the conversation turned to our kids, he talked about his daughter’s Digital Natives presentation at SXSW.

Apparently, he had pitched SXSW to stop talking to old fogie stogies like us about technology and have actual digital natives – who only know the world of gadgets  speak from their unique perspective.

I was simultaneously offended, envious, and intrigued.

Who the fuck are you calling old?

Why aren’t my kids presenting at SXSW?

When I finally worked through my mixed emotions, I tuned back in to hear him describe a world view he gained listening to his daughter and her co-presenter.

Oh right…..some 12 or 13 year old child prodigy who builds his own computers co-presenter.

This is the era of Digital Natives.

Talking to David made me think about how technologically different the world is for today’s youth than it was for any other generation.

We’re not so far removed from floppy discs, but kids today only know USBs.

Their Boost mobile starter phones have more computing power today than desktop computers in most financial institutions a decade ago.

But rather than drone on endlessly about what digital natives are and are not, I figured I’d grace you with one of my top ten lists.

Here are the top ten signs that you’re dealing with a digital native.

1. They’ve never bought a CD. It’s not that they’ve never purchased music. They just don’t need all the bells and whistles of album jackets, jewel cases and shrink wrap. Long gone are the days where you rushed to the store to cop an vinyl album. Then went 8 tracks. Then cassettes. CDs are media evolution’s latest victim. Digital natives get their media the minute it comes out – online. And if they do buy it, it’ll be on iTunes.

2. Netflix is their Blockbuster. Remember rushing to Blockbuster to rent the latest hit movies on DVD? Digital natives don’t. In fact, they probably don’t even know what a Blockbuster is. Digital natives dial up their movies on Netflix or Hulu or HBO Go. Maybe they hit a Redbox (to give their parents that nostalgic home movie watching experience). But watching movies at home (or on the go) is a digital streaming experience.

Good riddance to you sir!

3. Screens are keyboards. Digital natives know only the world of touchscreen inputs devices. They tap not type. They text 50 wpm using just their thumbs. When I was in high school, I took a typing/word processing class. The target was 50 words per minute, and you were considered expert if you typed above that. Today, the screen on a mobile device is the equivalent of a keyboard and digital natives feel right at home typing – I mean tapping – away on their screens.

4. They’re OS agnostic. Digital natives are equally versed in iOS and Android. Unlike the old guard, they take no sides and have allegiance to the device that meets their needs in the moment. Today it’s more about utility than brand. If it works right, they’ll buy it. Brand be damned! Hence competition between device makers remains fierce.

5. Google is a dictionary. Digital natives Google everything. When I was a kid a dictionary and the encyclopedia were how I figured things out. Didn’t know how to spell a word or it’s definition? I looked it up. Want to know the capital of Kazakhstan? I looked it up – it’s Astana – BTW. Digital natives simply Google it. Can’t spell? No worries, Google will offer you the correctly spelled word as an option.

6. Apple radio station. ITunes is dead. Today, your iPhone has Music. No more iTunes. Digital natives live in a Beats Music+Apple world – which you get free for 30 days BTW. Pandora, Spotify, SoundCloud, MixCloud, and countless digital radio stations have made it such that terrestrial radio stations hold low sway over digital natives, who configure and share their own playlists and find artists through underground videos on the interwebs.

7. Emoji is a language. When my kids got their mobile phones, virtually every text message included emojis. Not just one mind you, but streams of smiley faces, tear streaked to connote laughter, thumbs down to express disagreement – you get the picture. Emojis are in such high demand with digital natives that whole marketplaces developed for Facebook and Apple who both saw fit to add a bunch more to their keyboards.

9. Gaming as a social activity. If you’re a parent, you want your kids outside getting exercise, socializing and interacting with other kids. For digital natives, gaming is social. Most gaming systems (and virtually all computer games) let you play against other gamers virtually. And with immersive VR worlds and Google Cardboard, you can still be outside inside.

10. Multi-taking is the norm. Digital natives are comfortable using multiple screens simultaneously. Measuring how many screens a viewer uses while watching a program is a thing marketers track and want to know because digital natives rock multiple devices as matter of course. This always on always accessible characteristic defines digital natives.

Resistance is futile. Confessions of an Apple Watch owner.

A few days ago, I got the email I’d been waiting for months to receive.

It said, “your apple watch has arrived.”

I was in Bermuda at the time, installing a music library in Marcus Samuelsson’s eponymous restaurant, Marcus‘ at the Fairmont Hamilton Princess, so my glee was tempered by distance.

But over the next few days, I fantasized non-stop about how amazing my life was about to become.

My watch and I were about to become the best of friends.

I knew, I just knew, that my Apple Watch was a game changer and my life was going to be infinitely richer as a result.

But as I headed into Manhattan on a dreary Monday morning, I started to have misgivings.

Would I become one of those people constantly checking their wrist, desperate to see the source of the latest ping or buzz?

Was I trading up to yet another useless gadget full of sound and fury, yet signifying nothing?

My Shakespeare folks will appreciate that.

We can’t seem to put our phones down.

Every ten seconds we’re reading our emails, responding to texts, checking Facebook or engaged in some other inane activity involving a mobile device.

And that’s with a device we can put down.

What happens with that device is inextricably tied to our person?

I can’t help but think of the Borg.

The cybernetic beings from the Delta Quadrant that assimilated their victims, making them part of a collective or hive mind.

You know, the big cube thing from Star Trek, The Next Generation.

Each cyborg (hence “Borg”) was a undifferentiated part of the whole, sharing their thoughts and sensory input with them.

When you were captured by the Borg, they didn’t kill you.

Mechanical components were added to your anatomy, stripping you of your humanity and making you a part of the collective.

I know I’m probably being dramatic, but this thought keeps popping into my head: “Resistance is futile.You will be assimilated.”

I mean, sure, the Apple Watch can collect data on its wearer.

And it can share that data with Apple or the app developer, which then knows information about the wearer, but that’s not so bad. Is it?

Am I being assimilated?

Once I put on the watch, is there no turning back?

Only time will tell.

Four days in, and I’m fighting the good fight.

I do not automatically look at my wrist whenever a haptic alert beckons.

I shall not fall prey to your Siren song Apple Watch! Damn you to hell!

But resist as I may, I can already feel the endorphin rush whenever my wrist buzzes.

Each vibration draws me further down the rabbit hole.

And once I glance at her, even for a moment, I’m infatuated.

I mean really. I’ve only really checked out a few functions.

Like the activity monitor, which I clowned, is actually quite useful. 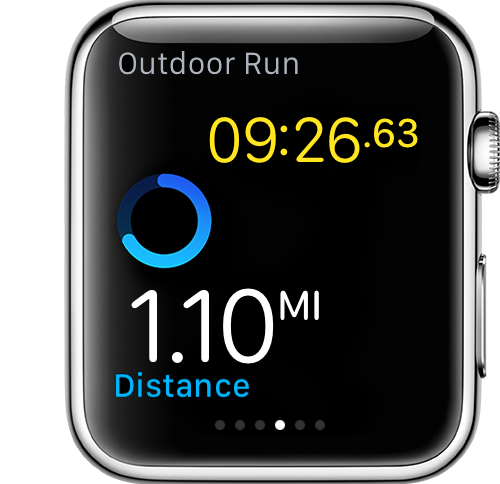 After plugging in your gender, age, height and weight, you can set daily fitness goals, and the watch will prompt you to stand, or exercise in order to keep you on track.

Yesterday, I hit my fitness goal of burning 720 calories. I actually burned 932 by walking 7.5 miles, exercising for 75 minutes and standing for sixty seconds once every hour for twelve hours.

Or the Remote app, which lets you control your other iOS devices when you’re on the same wi-fi network.

Last night, I got in four episodes of Game of Thrones on HBO Go on Apple TV, all controlled through my handy dandy Apple Watch. 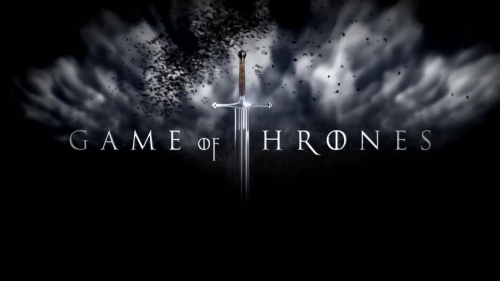 Or Chat, which lets you read and respond to text messages right from your wrist.

I’ve had numerous chat conversations without typing a single character.

I just speak into my watch, Dick Tracy style, and my words magically appear on the screen.

And I can choose to send my voice memo or the text equivalent. 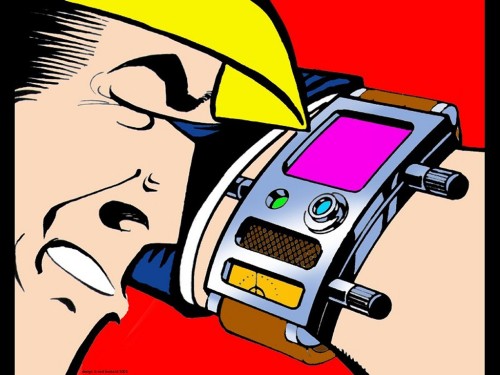 I can even send emojis to spice things up a bit.

Wait…have I already been assimilated?

Just taking it for a test drive so that I can tell all of you.

Anywho, I have not (yet) been assimilated, although I suspect it’s not far off….

Haven’t had enough of my ramblings? Check out my video review of the Apple Watch below!