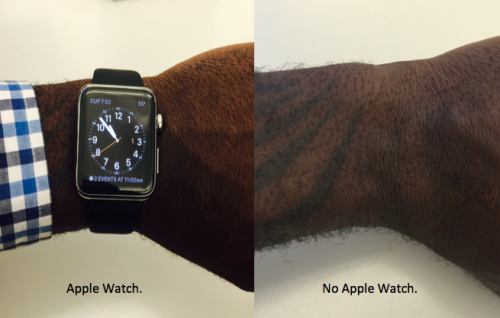 It’s been exactly one week since I let my business partner, Mark, borrow my Apple Watch and my feelings of withdrawal are palpable.

His wife wanted to get him an Apple Watch for his birthday, and he asked if he could take mine for a test drive before she dropped coin.

He’d previously heard me complain that the Apple Watch wasn’t all that, and he wanted to assess it for himself.

So I unpaired it from my iPhone and let him rock out.

What did I care, it was just a stupid toy, right?

One week later, as I reflect on how much I’ve maligned the Apple Watch, as being an expensive and glorified toy, I’m starting to realize the error of my ways.

Dare I say, I miss my watch?

I no longer have the convenience of doing the simple things like glancing at my watch for the time, or more sophisticated tasks like getting turn-by-turn directions.

I’ve been reduced to pulling out my phone for these tasks, which I thought were mere trifles when performed on my watch, but I now see were much more than that.

How could I have been so wrong?

You’re probably asking yourself, “what is this fool talkimbout?”

I’ll tell you what I’m talkimbout.

Ever since I got the Apple Watch as a birthday gift from my wife, I’ve been fairly consistent in my characterization of it as a glorified – and expensive – toy.

Sure, it’s got a nice design.

Sure, it’s baked with apps and loads of ‘cool’ features.

But so friggin’ what?

It’s not all that!

Whenever anyone noticed my watch and asked me what I thought, I’d give them the following rundown:

“The Apple Watch is a nice toy. But that’s all it is – a toy. Since I’ve had it, I use it mostly for the alerts: new emails, text messages, incoming phone calls, the activity monitor. It’s got other features, like the ability to make and receive phone calls, but what am I? Dick Tracy? Making phone calls from your wrist is just awkward. You can also control other iOS devices, using the Remote app on the watch, but that’s also not the best user experience. Or taking photos. Unless you remember to use the time delay mode, all your shots will have you pressing your wrist. Texting? Talk to text. You can send either a voice message or the text version of your message from your watch. And you can also ask Siri to perform certain tasks, but invariably, you’ll probably use your iPhone instead. All in all, it’s cute, but I wouldn’t spend money for it.”

One week without my watch, and I’m truly starting to appreciate that I derived significant utility from my watch.

For all the things I claimed I wasn’t or wouldn’t use it for, there were a host of things that I was using it for.

I’ve always got my phone on silent.

So whenever any alert came to my phone, invariably unless I was using it at the time, I missed it.

It wouldn’t be like an hour later – usually a few minutes or so.

But my response time was usually unintentionally delayed because of this gap.

With my watch, I could intentionally delay my responses or not, because I knew when the notification arrived.

The other day, a friend of mine from high school hit me up on Facebook asking if she should get the Apple Watch for her son for Christmas. 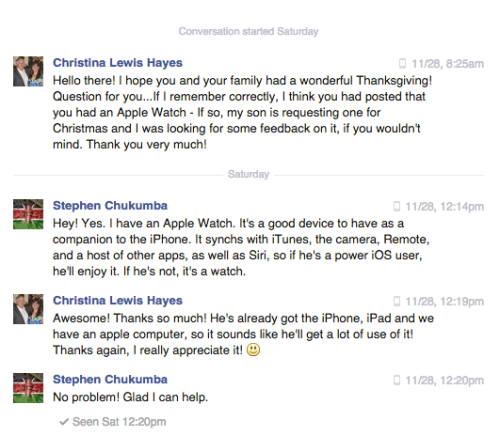 I couldn’t even help myself.

For all my smack talking about the Apple Watch being a toy, when asked, I offer an unabashed endorsement.

One week later without it, and I’m slowly realizing exactly how much my Apple Watch means to me…

If you’re in the market for an Apple Watch, then you should definitely check out the reviews out there for a less impassioned perspective.