Cough up $100 or pour water on your head. A study in successful social media campaigns. 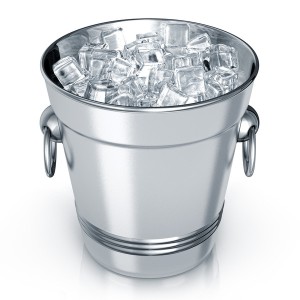 By now, I’m sure you’ve seen at least one video of one of your friends dumping a bucket of water on themselves.

Perhaps you heard about the POTUS’ refusal to subject himself to the ice-water ritual, instead opting to part with $100.

You may have even engaged in the asinine activity yourself, and called out folks you know to do the same (as I have).

What was that, you ask?

Only one of the most successful social media campaigns ever, that’s what!

Over the past few weeks the ALS organization launched a campaign to raise funds for, and awareness about the ailment, amyotrophic lateral sclerosis (ALS) more commonly known as Lou Gerhig’s Disease.

The Ice Bucket Challenge was simple.

If someone called you out, you had 24 hours to accept the challenge and either (a) film yourself dumping a bucket of ice water over your head, or (b) donate $100 to ALS (you could also do both as many did).

You also had to call out three of your own friends, family or colleagues to accept the challenge.

If your reading of this post is the first time you’re being made aware of this social media initiative, you’re either not on Facebook or you have no friends (or both).

Because everyone has been caught up in the ice bucket frenzy.

Which is partially why I’m designating the Ice Bucket Challenge the most successful social media campaign (by a non profit) I’ve ever seen.

When I thought about penning this post, I figured I do a little digging to see what other successful social media campaigns existed in the non-profit space.

And there were quite a few – none that I ever heard of or experienced – that seemed to have achieved the desired effects: they raised money and increased awareness about their respective causes.

One that stands out is the WATERisLIFE campaign, which hijacked the hashtag #firstworldproblems to highlight the problem of communities that lacked access to clean water.

Launched by the Water Is Life organization, the campaign sought to focus on the real issues facing people living in difficult situations throughout the world.

The success of that campaign generated over a million days worth of clean water to those in need.

Curious that the ALS campaign has us wasting water, while WATERisLIFE is trying to help folks access it.

Anywho, the point of this post is simply to reinforce the point that social media initiatives, when well thought out and properly executed, can work.

As Kickstarter aptly demonstrates, people respond favorably to properly crafted calls-to-action, to the tune of billions of dollars.

And as ALS has demonstrated, a good idea goes a long way.