The Samsung Galaxy Note LTE a “Game-Changer”? NOT!!!

Is this really a game-changer? Really?

Yesterday, I had a conversation with Daron Jenkins, a fellow technologist, and one of the founders of SCENEPR, an agency devoted to helping other agencies understand and leverage new media and technology.

Daron and I were talking about their upcoming SoLoMo starters+start ups event, and as we talked about the various potential topics for future sessions, somehow our discussion turned to the soon-to-be-released Samsung Galaxy Note LTE phone, which Daron described as a potential “game-changer.”

You must know that Daron and I are both Apple disciples.

So, needless to say, I was immediately incredulous upon hearing Daron’s statement.

A game-changer, to me, is something that makes all other competitors cringe with fear.

It’s something so totally left-of-center, that most are taken unaware, and left speechless.

A game-changer makes others in the space think, “why didn’t we think of that?”

It leaves them at a loss precisely because it creates or carves out a space for that new product, service, application, or what-have-you, that everyone/thing else seems obsolete in comparison.

Now, if you’re like me, the term “game-changer” evokes thoughts of the killer devices that permanently changed the landscape of the spaces they occupied.

In my humble opinion, there have been a few undeniable game-changers in the mobile space.

The first was the Palm Treo.

The first game-changer. The Palm Treo 270.

It was the first phone that effectively combined a phone with a PDA, offering the ability to make phone calls and keep your calendar, contacts and notes organized in one handy, handheld device.

The iPhone was the next.

The iPhone broke the mold and it's forever been broken.

Although other handset manufacturers offered their own version of the smartphone, Apple created a device that was simultaneously powerful, functional and elegant.

The last was the iPad. 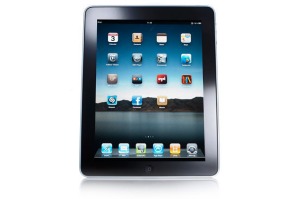 IMO, the iPad ushered the end of all tablet competitors.

Again, while there are other tablets in the market, none have achieved the recognition or stature of Apple’s offering.

Which brings me back to Daron’s statement.

It was with much consternation that I even continued the conversation, in light of what I felt was an obvious flaw in his statement.

We all know that NOTHING competes with Apple.

And marketers have responded by advising clients that sites be built without Flash.

Sure, Apple releases a new product every other day.

And people routinely line up outside of Apple stores days in advance of every new product release.

Sure, Apple’s products are tres cher.

And people regularly shell out the king’s ransom required to own it’s devices.

So whatever Samsung is coming with, has to be so spectacular, so innovative, so feature rich, so ‘that ish’, that one’s initial visceral response is “I must have it!”

To their credit, their latest commercial, poking fun a Apple-ophiles, does point out Apple’s many shortcomings.

But that doesn’t necessarily equate to changing the game.

At the end of our call, we agreed that deploying the Galaxy Note LTE with AT&T was a major faux pas, with AT&T’s spotty service and network bandwidth.

We also agreed that “game-changer” was an extremely generous characterization for Samsung’s latest entry into the mobile/tablet space.

But we’ll just have to wait and see.

I, for one, am not holding my breath.

Anyone who knows me, knows I love tattoos.

The last tat I got was a tiger’s head on my left pectoral, which I got well over a year ago.

In total, I’ve got 17, including my wife’s name, kids’ names, several tribals, a few dragons and a complete back piece.

I’ve been meaning to get my last child’s name inked on my left bicep, but simply haven’t gotten around to it.

And I’ve been jonesing.

To make matters worse, I’ve been in the vicinity of my tattoo artist several times, but simply haven’t been able to drop in and put in the work.

Worse still, are all the tattoo shows that have been on recently – mocking me.

The proverbial straw was the Afropunk piece I saw today, featuring a full spread of tats.

Flash, I’m putting an all-points bulletin out for you.

I need another tat!

Got tattoos? Will hug.

I got my first tattoo when I was 20. The tattoo was a Native American image of a medicine man, which I got on my right shoulder from Big Brad, a 6’5″ tattoo artist (who looked every bit the part of a Hell’s Angel) at his tattoo parlor in South River, New Jersey.

I tolerated the mild sensation of pain, knowing that on the other side waited my first tattoo. Afterwards, as it healed, I marveled at how it looked, and knew that I would get another.

My second tattoo was a hand-drawn design (my representation of a phoenix) which I had Brad put around my belly button. The pain was markedly different from that of my arm, but tolerable, and I focused, once again, not on the pain I was experiencing, but on the knowledge that when Brad was done, I would have, yet another tattoo.

My third tattoo was a griffin lion, on my left shoulder blade. Before I knew it (and with considerably less pain than either of my first two) I was done, and clearly addicted to tattoos.

Since leaving New Brunswick, and college, I have gotten 14 more tats, including the names of my wife and children on my arms, a tribal dragon on my left thigh, a tribal double dragon across my lower back and my sides/ribs, a band on my right forearm, three tribal freehands on my right and left biceps, and left forearm (one which I got in Bali on our honeymoon), a full mosaic on my back depicting a prophet receiving the word of God and a trio of angels, and a Japanese tiger on my left pectoral. 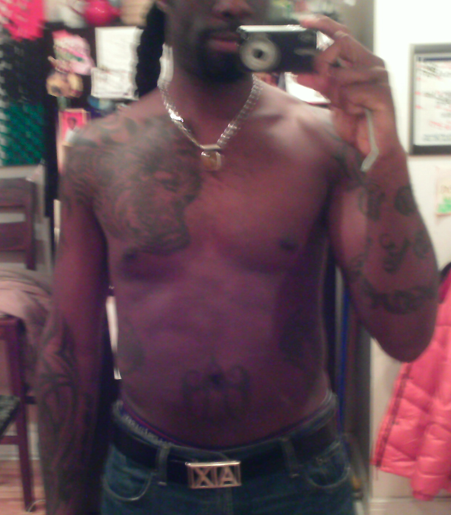 Some of my tattoos were completed in one sitting, while others took several sessions lasting up to four hours each. All told, I’ve spent no less than 48 hours under the gun. I’ve become quite intimate with my tattoo artist, Flash, as a result of all these tats. No homo.

A few of my tattoos are abundantly personal, others whimsical, and at least one, totally impulsive. But I love them all, and will probably get a few more before I’m done.

Why all this talk of tattoos? Let’s just say I’ve got tattoos on the brain.

I spent Thanksgiving evening at the Princeton Marriott Hotel and Conference Center at Forrestal with the family and we went swimming in the heated pool. While we were there, there were these two little boys, who just stared at me the whole time.

I thought they simply lacked home training, until my wife pointed out that I’m covered in tattoos, and the kids had probably never seen a dreadlock with tats before in their life.

Last night, I responded to my friend’s indirect Facebook query about tattoos. The takeaway being that anyone covered in tattoos has something wrong with them.

In all fairness to my friend, she used Lil Wayne and Iron Mike as examples of excessive tattooing, but I took issue nonetheless. Anyone who covers themselves with tattoos has issues? I think not!

Sure, SOME people who cover themselves in tattoos may suffer mental deficit, of which tattoos are the outward manifestation of their inner demons. But that does not mean that all people who sport lots of tats are similarly compromised.

I, for one (well…I may not be the best example of sanity, but let’s assume I am sane) don’t believe that my tattoos are evidence of mental imbalance. I LIKE tattoos. A LOT. So I have a lot of tats. It’s really that simple.

Members of the Ink Nation are part of a subculture, that prim and proper people cannot and will never have the capacity to understand.

I think that tats, like any other form of body modification, is simply a reflection of the person. To make the leap that anyone who enjoys anything (that is not inherently harmful to themselves or other people) is crazy, is a bit…crazy!

If you’re a strict constructionist, and take every word of the Bible literally, then people who get tattoos are irredeemable sinners, destined for hell.

So the next time you see someone covered in tattoos, don’t shrink away or stare dumbfound. Walk over to them and give them a hug!