Hello, Ello? I hate Facebook too! Where’s my invite? UPDATE! 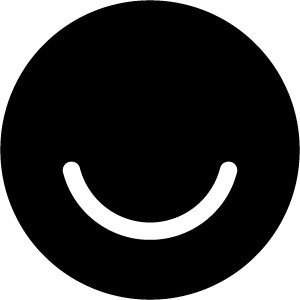 I’m sure by now you’ve heard of the anti-Facebook social media platform, Ello, that’s been all over the news.

It hasn’t been all over the news.

It launched way back in March (that’s like five years ago in tech years), and has only recently been getting mainstream attention.

Primarily because the CEO, Paul Budnitz, has been making waves with his controversial statements about Facebook.

I see that some background is in order.

And you wouldn’t be alone.

Ello is a new social media platform, released several months ago, that lets it’s users post status updates, photos and GIFs, as well as comment on their friends’ posts.

It’s being touted as the antithesis of Facebook, because it has no ads, the mainstay of the social media world.

And a real break from how most social media networks operate.

Their manifesto (called “Manifesto”) clearly speaks to the significance of being ad free.

Your social network is owned by advertisers.

Every post you share, every friend you make and every link you follow is tracked, recorded and converted into data. Advertisers buy your data so they can show you more ads. You are the product that’s bought and sold.

We believe a social network can be a tool for empowerment. Not a tool to deceive, coerce and manipulate — but a place to connect, create and celebrate life.

You are not a product.

But it’s only quasi-free.

Sure, if you’re using the platform “naked,” it’s free.

If you want to add any features, you’ve got to upgrade – to just the features you want, of course – for a fee.

This customization, allowing users to create an Ello page unique to them, is another feature which sets Ello apart from Facebook.

As someone who hates Facebook for introducing paid (or “sponsored” rather) ads into my feed, Ello seems like a breath of fresh air.

Who wouldn’t want to read their friends’ inane drivel devoid of pesky ads clogging up their timelines?

Oh, wait…Ello is invitation only.

I, for one, am at a complete loss for how I have not yet been invited to take Ello for a test drive.

My 1,015 readers (as of this morning) are dying to know what Ello is all about.

And they shouldn’t have to troll the interwebs or chance upon an article in Mashable, Engadget, Techcrunch, Business Insider, or some other marginal publication, to get their tech news, when I’m all they read!

Me thinks too much of myself, me thinks.

Point is, Ello is staking its claim as an alternative to Facebook.

And the future looks rosy (for now).

Time will tell whether their gambit pays off.

I’ve requested an invitation, and received a reply (letting me know that I’d have to wait). 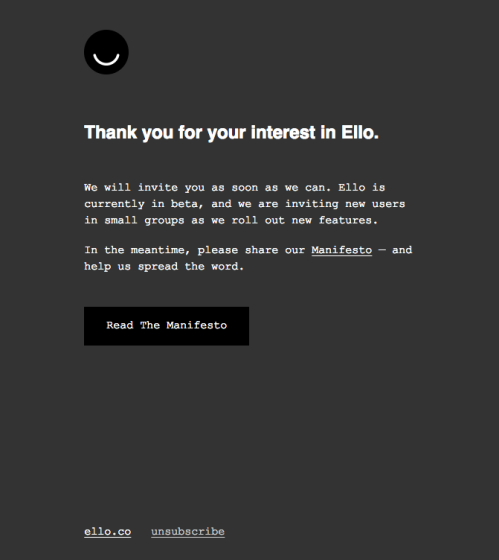 I was hoping for a “Welcome to Ello” message. Instead, I got this. SMH

So I’ll give you the inside scoop as soon as I can.

Nick Beck is my dude!