The iPad 4 arrives with a whimper. But it’s better than the Mini. 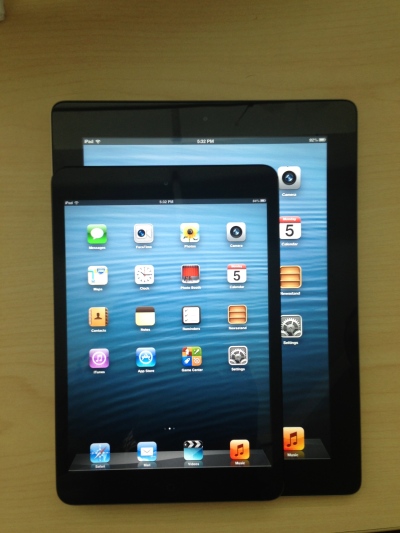 I’ll tell you why.

Last month, when they announced the iPhone 5, many speculated that Apple would also unveil the iPad Mini.

Others felt that Apple wouldn’t want to upstage the iPhone with the iPad mini.

Ultimately, the iPhone was announced alone.

On Wednesday, last week, however, they announced two new products, the iPad Mini AND the iPad 4.

Few, like myself, even took notice that there was another iPad release.

Hadn’t Apple withheld the release of the iPad Mini to avoid one device stealing the thunder from another?

Why, then would they announce the release the iPad 4 and the iPad Mini on the same date?

It’s not like the iPad 4 isn’t worthy of shine.

It’s got the new lightning connector.

And supposedly it’s fast a hell.

It’s got an A6X processor and doubled the speed of wifi.

There’s also a higher quality FaceTime camera, which means you can see yourself…better?

But as many analysts have noted, it’s just an iterative change.

Well we got both the iPad 4 and Mini in the office yesterday, and the Mini is nothing to write home about. 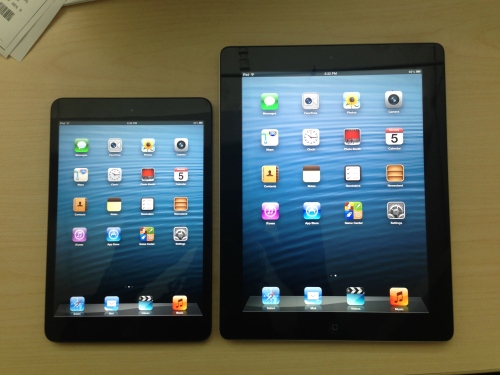 Side by side comparison. Notice anything different?

I can say this much about it – it’s smaller.

You can fit it comfortably in your hand, like the Galaxy Note.

Compared to the iPad 4 (which weighs a friggin’ ton) it’s light as a feather.

But that’s about where the benefits end.

The display isn’t retina, and the difference is noticeable.

And everything is smaller.

You would think that looking at websites on the Mini would be akin to viewing on a full-size iPad, but tis not the case.

The text is too small to be read easily without eye strain, and everything is just…smaller.

The iPad 4, for it’s part is really just a blown out iPad 2.

Like it’s predecessor (the iPad 3), it’s heavy as shit.

This extra weight comes not from the retina display, the new processor or additional antennae.

Want all those bells and whistles?

Then hold this fat ass battery.

Both loaded quickly and streamed fine.

Folks filed in to take a look at the Mini, and the universal opinion was that it was ‘cute’ and little.

And that may be enough for folks to shell out $329 for the wifi only model.

And the extra weight may not bother folks who are looking to preserve their eyesight and cop the iPad 4.

To be honest, I was underwhelmed by both devices.

iPad Mini. iPad Jr. Whatever you are, just get here already.

I’ve been quietly watching from the sidelines to see what, if anything Apple is going to do with the iPad Mini.

So far, there have been (the standard) sightings of the Mini, leaked to the internet.

And oodles and oodles of speculation about what features will be baked into it.

To be honest, I can’t say that I’ve followed any of this chatter closely.

I’ve done that dance before.

Wait with bated breath, only to be let down when the <insert name of much anticipated Apple device here> actually arrives.

At this point, it’s just that I know how Apple does.

Why should the iPad Mini be any different?

We all know what the iPad mini should be.

But it’s unlikely that it will be what we expect.

I firmly believe that the iPad Mini should be a small version of the iPad.

It should be fully functional with all its current features intact.

That means, the iPad Mini should have: a forward and read-facing camera, wifi, 3G, essentially everything the current iPad 3 has.

But will Apple give us the device we expect?

It will most likely be like the original iPad.

You remember how disappointed you were when you opened up your iPad and realized that there was no camera.

Here comes the iPad 2, with what?

Why do they do that to us?

Didn’t the iPhone already have 2 cameras!?

So why strip the iPad of what everyone assumed would have been a natural feature to include in the iPad?

But they’re not going to do that to the iPad Mini?

Isn’t the whole point of the iPad Mini offering to compete with the other smaller form tablet devices in the market today?

Shouldn’t the strategy be to bake all the bells and whistles that devices like the Kindle Fire and Galaxy Note have?

Wouldn’t it be counter-intuitive to withhold features that consumers are already used to on the current iPad?

I got my son the Kindle Fire, and it really is a great device.

Now there’s the blown out HD version, which is a real step up in a number of respects for Kindle.

They blew it out!

Apple would be wise to follow suit and go H.A.M. with the iPad Mini.

H.A.M.=hard as a motherfucker for my Kanye West challenged readers.

Unfortunately, experience tells us that Apple doesn’t always do what’s best for the consumer.

So while I’m interested to see the new iPad Mini, I’ve set my expectations very low.

I’d rather have an iOS device that synchs with the rest of my Mac world, than some other device that doesn’t.

Will I be disappointed.

History tells us that Apple is notorious for putting out products that often fall far short of user expectation.

Apple should just release the iPad Mini and put us all out of our collective misery already.

But with a constantly moving announcement date, its unlikely that we’ll see an iPad Mini in the wild anytime soon.