30 Under 30. Forbes counts F2FA founders among the brightest. 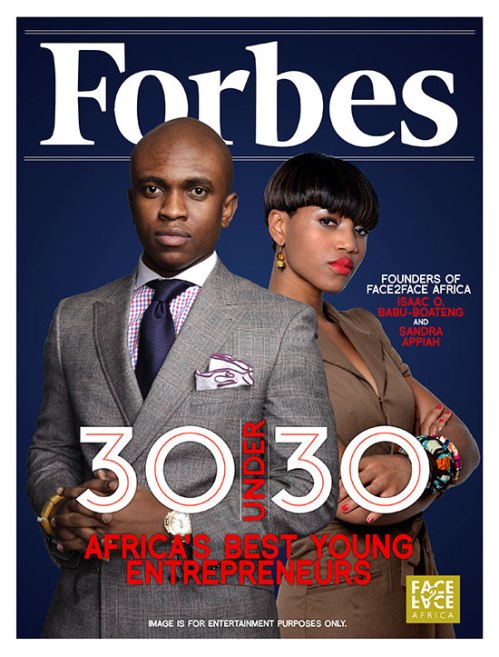 Isaac Boateng and Sandra Appiah are two to watch.

Well this week two young cats I mentor were honored with a remarkable distinction.

They were cited in an article in Forbes magazine.

The article, titled, 30 Under 30: Africa’s Best Young Entrepreneurs, featured 30 of Africa’s most enterprising young entrepreneurs under the age of 30.

If you know Forbes, then you know that this is a pretty big accomplishment.

So you can imagine how my chest swelled with pride as I read the article.

Sandra Appiah, 23 and Isaac Boateng, 28, both Ghanaian nationals are the founders of Face2Face Africa (F2FA), a New York city-based new media company with a mandate to restore Africa’s image within the global community.

Sandra Appiah and Isaac Boateng are my mentees.

Mind you, they didn’t even tell me they were being cited.

Amazing and modest? I love these kids!

It just popped up Monday morning in one of my Google Reader feeds.

Now I’m not one to brag…

But I have a knack for molding young talent.

I’ve worked with and mentored two other young entrepreneurs, who have achieved similar distinctions.

So this was not a fluke.

It started with Corey Llewellyn.

“CL” as he’s know among his friends, was one of my first clients back in the day.

He walked into my office and asked me to help him start a company.

At the time, he couldn’t afford me, but I took him on anyway.

He was a smart kid, with great ideas and hella contacts.

And I could see that spark in him that told me he was going places.

And the company, Digiwaxx, is a household name in the music industry.

Then there was Chris Anokute.

He too, had the spark of greatness.

Chris told me he was going to be a record executive the moment I met him.

When everyone was saying he should finish college, I told him to follow his dream.

I got him his first internship at a record label, and the rest is history.

And the kid who started off as my intern, is now the Senior Vice President of A&R at Universal Records.

So it’s not without precedent that my current underlings are getting their props.

Forbes is just the tip of the iceberg.

Now, I can’t really take credit for the success that these cats have achieved.

Their vision for Face2Face Africa crystalized long before they encounter the entrepreneur whisperer.

All I did was help them cut to the chase and fast track the success (that they’ve already started to achieve).

In fact, my best work comes from working with cats who know what it is that they want to do.

Folks like this just need a reassuring word or objective advice to keep them on the right path.

And I’m quite adept at helping people see their untapped potential.

There I go bragging again.

Anywho, the point of this meandering post, is that Sandra Appiah and Isaac Boateng, are two young cats who’s names you’d better remember.

If, for no other reason, than I told you so…

Because I just did.

I’ve just been invited to a launch party for F2FA magazine, a globally distributed print magazine published by Face2Face Africa, launching in the spring of 2012.

The launch party is next weekend, March 30th at Pranna Lounge, and I’m more than a little excited. 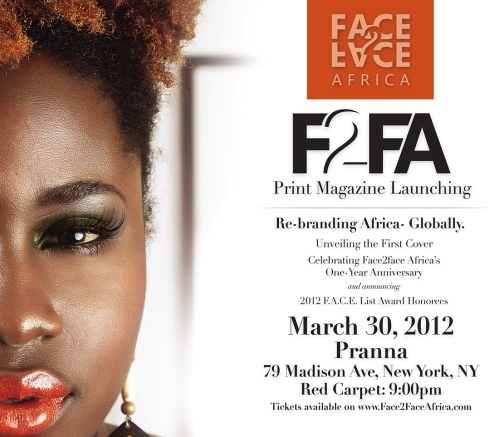 F2FA or Face2Face Africa, is the brain child of Isaac Boateng and Sandra Appiah, two Ghanaian-born entrepreneurs, who wanted to put a new face (pun-intended) on how Africa is perceived.

Per their mission statement “Face2face Africa is a powerful, riveting, and refreshing media force that serves as the voice of Africa and represents Africans positively on a global level.”

Face2face Africa, an online magazine launching in the first quarter of 2011 with a mission of Restoring Africa’s Image. The initiative was started by young Africans residing in the United States who realized that it was their time to make a difference in Africa.

From my interaction with the founders, F2FA impressed me with a singular focus on their mission of reframing the perception of Africa and Africans.

When I spoke to them a few months ago, during their search for the right person for their first cover, they described the F2FA magazine as a vibrant, multi-niche, high-end magazine.

They wanted the magazine to be the vehicle which used creativity to explore the many facets of African politics, culture, entertainment, fashion, lifestyle, and the different methods Africans were employing to inspire change, progress, and development on the continent.

Their online magazine currently features stories about African artists, musicians, designers, authors and standouts from all walks of African life.

And if their online version is any indication of things to come, I’m confident that the print version will equally impress.

The launch party next weekend promises to be a star-studded affair.

Not that I’m in to celebrities.

But we (my partners and I) were instrumental in getting the personality that graces the inaugural cover (I can’t tell you who it is, but they’re reeaaalllyyy popular), so I’m also excited for that reason as well.

Although some would question the wisdom of publishing a print magazine when the big boys are folding and closing up shop, opting for digital subscription models, F2FA believes they’ve got a niche.

And they are planning on releasing an app to satisfy readers who want to access F2FA magazine from the convenience of their mobile or tablet devices.

So they’re definitely looking to cover all bases.

And make sure you stay up on F2FA…they’re the new face of Africa!