I play a lot of solitaire on my iPhone.

It’s my go-to game when I’m taking the train, talking to someone boring or just passing the time mindlessly.

Sure there are other games out there, like the insanely addictive Pokemon Go.

But I can’t be walking around tryin’ to catch ’em all, walking into people and draining my battery in the process.

And I really am not about the brightly colored, sensory stimulating, action/adventure games in abundance in the App Store.

I’m good with a simple game of solitaire.

I play a free version of the game created by MobilityWare.

Because it’s free, between each game – win or lose – they serve an ad.

I’ve played well over 10,000 games of solitaire, so I’ve seen thousands of ads.

Some of the ads are for other games, apps, insurance, cars, television shows or movies. 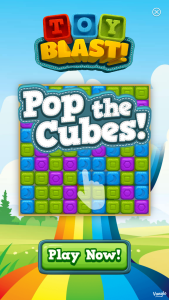 Some are static ads, video, or interactive surveys or animated game tutorials.

Most of the time I just ignore them, but recently, I’ve been paying attention and I’ve noticed something interesting: mobile ads suck.

I know I’m generally a caustic dude, prone to being overly critical.

But in this instance, I’m being particularly objective.

A few months ago, a recruiter reached out to me about a position with a company which specialized in mobile ads.

Their client was looking for someone with deep native mobile experience and wanted to forward my resume.

When she sent along the job description, I checked them out and thought it made sense to do some research.

If they called me in, I could articulate what I thought about the current state of mobile ads and not sound like a total dolt.

So I started to pay attention to the ads being served between my countless games of solitaire.

What I observed was that mobile ads suffer from all types of fuckery.

But these are the top five offenses I observed (and things you should avoid if you’re serving mobile ads in your app).

1. Size matters. A mobile screen is small. So why wouldn’t your ad fill  the entire screen? If you’re trying to make an impact, you’re not going to do it by forcing users to strain their eyes to make out your shitty ad. Make sure that the ad platform or service you use delivers high quality, fully scaled content that fits the dimensions of the screens being served. 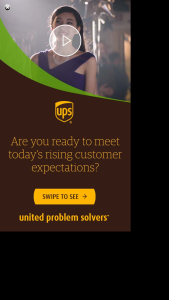 So UPS, what were you planning on doing with the other 1/3 of the screen?

2. Orientation. I typically play solitaire in portrait mode. And for the most part, the ads that are served automatically mirror the orientation of my screen. But every so often, there’s one that doesn’t. Not only is the ad in the wrong orientation, but it’s also locked in that orientation, forcing me to turn my screen to watch/read it or access the exit button. If you’re delivering mobile ads, be sure that they’re not in a fixed position. And if the optimal viewing perspective is portrait (or landscape), make sure that you’re not forcing your user to only view it in that orientation.

This ad started off in landscape mode, but re-orientated, when I turned my screen.

3. Give us free! One of my absolute pet peeves is when there is no way to exit out of an ad. Most ads have an “X” prominently displayed on he screen when they show up, allowing me to immediately close it and resume playing solitaire. Others have a slight delay, with the “X” appearing about five seconds after the ad is displayed. But the offenders have no means of exiting their ads or worse still, when you do click on the “X” another ad appears forcing you to exit it again! Motherfuckers! Can I play my solitaire? Always give your users an out.

I thought that pressing the x in the upper right hand corner would do the trick, but no!

The trick was on me. I had to exit out of this ad twice!

How about this ad with no “x” at all!

4. Short and sweet. Have you seen those ‘countdown’ ads, which show you how much time remains in the ad? How about the ones which count down how much time before you can exit out of them? Presumably, they do this because they know folks have short attention spans and don’t want to suffer through ads. And these are the better ones! Many ads are just too long and for no good reason. Ads are intrusive and if you’re going to intrude, make sure its no longer than it has to be. Best practice says a video ad shouldn’t be more than 15 seconds, and if you’re going to be delivering ads between content, make sure users can exit out at will. Per Tip No. 4, don’t make them watch to the end if they don’t want to.

“See All”? That’s your call to action? Boo Hiss!

So there you have it, the top five tips for not having sucky mobile ads.

If you’re managing ads yourself, observe these tips. If you’re working with a mobile ad network, make sure you’ve got the ability to review the ads being served to make sure that they meet these standards.

Feel free to share your experiences with mobile ads and any tips you might have for making them better.